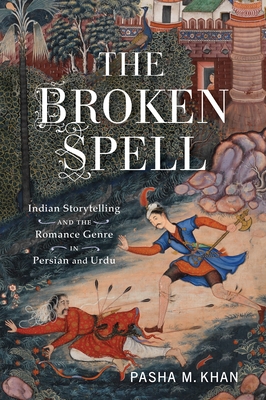 The Broken Spell: Indian Storytelling and the Romance Genre in Persian and Urdu is a monograph on the rise and fall in popularity of "romances" (qissah)-tales of wonder and magic told by storytellers at princely courts and in public spaces in India from the sixteenth century to the twentieth. Using literary genre theory, author Pasha M. Khan points to the worldviews underlying the popularity of Urdu and Persian romances, before pre-existing Islamicate rationalist traditions gained traction and Western colonialism came to prominence in India.

In the introduction, Khan explains that it was around the end of the nineteenth century that these marvelous tales became devalued by Orientalists and intellectually colonized Indian elites, while at the same time a new genre, the novel, gained legitimacy. Khan goes on to narrate the life histories of professional storytellers, many of them ?migr's from Iran to Mughal-ruled India, and considers how they raised their own worth and that of the romance in the face of changes in the economics, culture, and patronage of India. Khan shows the methods whereby such storytellers performed and how they promoted themselves and their art. The dividing line between marvelous tales and history is examined, showing how and why the boundary was porous. The study historicizes the Western understanding of the qissah as a local manifestation of a worldwide romance genre, showing that this genre equation had profound ideological effects. The book's appendix contains a translation of an important text for understanding Iranian and Indian storytelling methods: the unpublished introductory portions to Fakhr al-Zamani's manual for storytellers.

The Broken Spell will appeal to scholars of folklore and fairy-tale studies, comparative literature, South Asian studies, and any reader with an interest in India and Pakistan.

Pasha Mohamad Khan is the chair in Urdu language and culture and assistant professor at the Institute of Islamic Studies at McGill University. He is a scholar of literature, and particularly of marvelous tales, in Urdu-Hindi and other South Asian languages including Persian and Punjabi.
or support indie stores by buying on
Copyright © 2020 American Booksellers Association