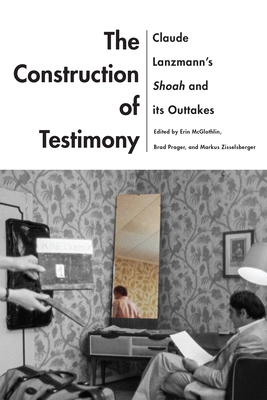 The Construction of Testimony (Hardcover)

In The Construction of Testimony: Claude Lanzmann's Shoah and Its Outtakes, editors Erin McGlothlin, Brad Prager, and Markus Zisselsberger gather contributions on how Shoah (1985) fundamentally changed the nature and use of filmed testimony and laid the groundwork for how historians and documentarians regard and understand the history of the Holocaust. Critics have taken long note of Shoah's innovative style and its place in the history of documentary film and in cultural memory, but few scholars have touched on its extensive outtakes and the reams of documentation archived at the United States Holocaust Memorial Museum and at Yad Vashem, or the release of five feature-length documentaries based on the material in those outtakes.

The Construction of Testimony, which contains thirteen essays by some of the most notable scholars in Holocaust film studies, reexamines Lanzmann's body of work, his film, and the impact of Shoah through this trove-over 220 hours-of previously unavailable and unexplored footage. Responding to the need for a sustained examination of Lanzmann's impact on historical and filmic approaches to testimony, this volume inaugurates a new era of scholarship, one that takes a critical position vis-?-vis the filmmaker's posturing, stylization, and editorial sleight-of-hand. The volume's contributors engage with a range of dimensions central to Lanzmann's filmography and the outtakes, including the dynamics of gender in his work, his representation of Nazi perpetrators, and complex issues of language and translation. In light of Lanzmann's invention of a radically new form of witnessing and remembrance, Shoah laid the framework for the ways in which subsequent filmmakers have represented the Holocaust cinematically; at the same time, the outtakes complicate this framework by revealing new details about the filmmaker's complex editorial choices. Scholars and students of film studies and Holocaust studies will value this close analysis.

Erin McGlothlin is associate professor of German and Jewish studies at Washington University in St. Louis. She is the author of Second-Generation Holocaust Literature: Legacies of Survival and Perpetration and editor of Persistent Legacy: The Holocaust and German Studies (coedited with Jennifer Kapczynski). Brad Prager is professor of film studies and German studies at the University of Missouri. He is the author of After the Fact: The Holocaust in Twenty-First Century Documentary Film and The Cinema of Werner Herzog: Aesthetic Ecstasy and Truth. Markus Zisselsberger teaches English at St. Frances Academy in Baltimore. He is the editor of The Undiscover'd Country: W. G. Sebald and the Poetics of Travel and "If we had the word." Ingeborg Bachmann: Views and Reviews (coedited with Gisela Brinker-Gabler).
or support indie stores by buying on
Copyright © 2020 American Booksellers Association