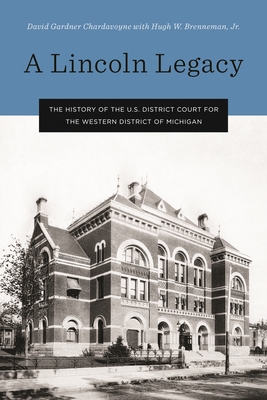 The History of the U.S. District Court for the Western District of Michigan (Great Lakes Books)

A Lincoln Legacy: The History of the U.S. District Court for the Western District of Michigan by David Gardner Chardavoyne with Hugh W. Brenneman, Jr. provides the first and only comprehensive examination of the history of the United States federal courts in the Western District of Michigan. The federal courts were established by the U.S. Constitution to adjudicate disputes involving federal laws, disputes between litigants from different states involving state and federal laws, and to punish violations of criminal laws passed by Congress. During the Civil War, Abraham Lincoln signed legislation creating two federal districts in the state of Michigan: the Eastern and Western Districts-the latter of which is headquartered in Grand Rapids and which now encompasses the western half of the Lower Peninsula and all of the Upper Peninsula. With the rapid expansion of legislation passed by Congress, the increasing mobility of society, and the growth of interstate commerce, the federal courts have assumed an important and sometimes dominant role in major litigation today.

In A Lincoln Legacy, Chardavoyne tracks the history of these courts over eleven chapters, from their creation by the Northwest Ordinance of 1787 to 2020. He discusses the changes in society that drove the evolving federal litigation and some significant cases heard in the Western District. Additionally, fifteen appendices are included in the book, listing of all the federal circuit and district judges in the Western District; commissioners; magistrate judges and bankruptcy judges; U.S. Attorneys; clerks of the courts; U.S. Marshals; and more. Chardavoyne also identifies auxiliary offices and organizations revolving around the federal court that play a major role in its activities (e.g., the U.S. Attorney's Office, the Federal Public Defender's Office, the Federal Bar Association, etc.). A Lincoln Legacy provides a thorough examination of the history of the federal courts of Western Michigan. It will appeal to those learning and practicing law, as well as those with an interest in Michigan history.