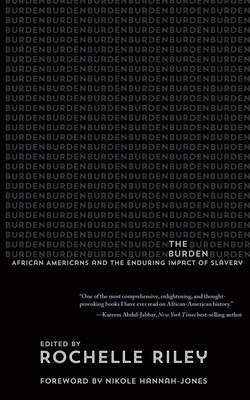 African Americans and the Enduring Impact of Slavery

The Burden: African Americans and the Enduring Impact of Slavery is a plea to America to understand what life post-slavery remains like for many African Americans, who are descended from people whose unpaid labor built this land, but have had to spend the last century and a half carrying the dual burden of fighting racial injustice and rising above the lowered expectations and hateful bigotry that attempt to keep them shackled to that past.

The Burden, edited by award-winning Detroit newspaper columnist Rochelle Riley, is a powerful collection of essays that create a chorus of evidence that the burden is real. As Nikole Hannah-Jones states in the book's foreword, "despite the fact that black Americans remain at the bottom of every indicator of well-being in this country-from wealth, to poverty, to health, to infant mortality, to graduation rates, to incarceration-we want to pretend that this current reality has nothing to do with the racial caste system that was legally enforced for most of the time the United States of America has existed." The Burden expresses the voices of other well-known Americans, such as actor/director Tim Reid who compares slavery to a cancer diagnosis, former Detroit News columnist Betty DeRamus who recounts the discrimination she encountered as a young black Detroiter in the south, and the actress Aisha Hinds who explains how slavery robbed an entire race of value and self-worth. This collection of essays is a response to the false idea that slavery wasn't so bad and something we should all just "get over." The descendants of slaves have spent over 150 years seeking permission to put this burden down. As Riley writes in her opening essay, "slavery is not a relic to be buried, but a wound that has not been allowed to heal. You cannot heal what you do not treat. You cannot treat what you do not see as a problem. And America continues to look the other way, to ask African Americans to turn the other cheek, to suppress our joy, to accept that we are supposed to go only as far as we are allowed." The Burden aims to address this problem. It is a must-read for every American.

Rochelle Riley is an award-winning newspaper columnist who is no longer seeking permission to put the burden down. She has fearlessly called out elected officials who should have been ashamed of themselves and has helped raise millions of dollars for just causes, especially the fight for improved adult literacy. She offers commentary on MSNBC and NPR and contributes to Essence and Ebony magazines. She was inducted into the Michigan Journalism Hall of Fame in 2016, received the 2017 Ida B. Wells Award from the National Association of Black Journalists and Northwestern University, and was awarded the 2017 Eugene C. Pulliam Fellowship by the Society of Professional Journalists. She also is a global wanderer who has visited twenty-six countries and counting.
or support indie stores by buying on
Copyright © 2020 American Booksellers Association