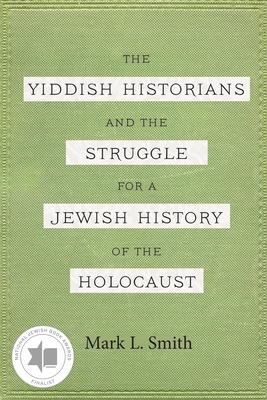 The Yiddish Historians and the Struggle for a Jewish History of the Holocaust identifies the Yiddish historians who created a distinctively Jewish approach to writing Holocaust history in the early years following World War II. Author Mark L. Smith explains that these scholars survived the Nazi invasion of Eastern Europe, yet they have not previously been recognized as a specific group who were united by a common research agenda and a commitment to sharing their work with the worldwide community of Yiddish-speaking survivors.

These Yiddish historians studied the history of the Holocaust from the perspective of its Jewish victims, focusing on the internal aspects of daily life in the ghettos and camps under Nazi occupation and stressing the importance of relying on Jewish sources and the urgency of collecting survivor testimonies, eyewitness accounts, and memoirs. With an aim to dispel the accusations of cowardice and passivity that arose against the Jewish victims of Nazism, these historians created both a vigorous defense and also a daring offense. They understood that most of those who survived did so because they had engaged in a daily struggle against conditions imposed by the Nazis to hasten their deaths. The redemption of Jewish honor through this recognition is the most innovative contribution by the Yiddish historians. It is the area in which they most influenced the research agendas of nearly all subsequent scholars while also disturbing certain accepted truths, including the beliefs that the earliest Holocaust research focused on the Nazi perpetrators, that research on the victims commenced only in the early 1960s and that Holocaust study developed as an academic discipline separate from Jewish history. Now, with writings in Yiddish journals and books in Europe, Israel, and North and South America having been recovered, listed, and given careful discussion, former ideas must yield before the Yiddish historians' published works. The Yiddish Historians and the Struggle for a Jewish History of the Holocaust is an eye-opening monograph that will appeal to Holocaust and Jewish studies scholars, students, and general readers.

Mark L. Smith has taught Jewish history at the University of California, Los Angeles, where he received his PhD in 2016. He writes and lectures on East European Jewish history and culture, with a special interest in Holocaust historiography and Yiddish scholarly writing.
or support indie stores by buying on
Copyright © 2020 American Booksellers Association