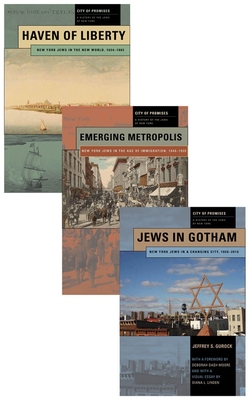 A History of the Jews of New York, 3-Volume Box Set

New York Jews, so visible and integral to the culture, economy and politics of America's greatest city, has eluded the grasp of historians for decades. Surprisingly, no comprehensive history of New York Jews has ever been written. City of Promises: A History of the Jews of New York, a three volume set of original research, pioneers a path-breaking interpretation of a Jewish urban community at once the largest in Jewish history and most important in the modern world.

Volume I, Haven of Liberty, by historian Howard B. Rock, chronicles the arrival of the first Jews to New York (then New Amsterdam) in 1654 and highlights their political and economic challenges. Overcoming significant barriers, colonial and republican Jews in New York laid the foundations for the development of a thriving community.

Each volume includes a "visual essay" by art historian Diana Linden interpreting aspects of life for New York's Jews from their arrival until today. These illustrated sections, many in color, illuminate Jewish material culture and feature reproductions of early colonial portraits, art, architecture, as well as everyday culture and community.

Overseen by noted scholar Deborah Dash Moore, City of Promises offers the largest Jewish city in the world, in the United States, and in Jewish history its first comprehensive account.

Howard B. Rock (Author) Howard B. Rock is Professor of History Emeritus at Florida International University. He is the 2012 runner-up for the Dixon Ryan Manuscript Award presented by the New York State Historical Association, for Haven of Liberty: New York Jews in the New World, 1654-1865. He is also the author or editor of five other books. Deborah Dash Moore (Author) Deborah Dash Moore is Frederick G. L. Huetwell Professor of History and Professor of Judaic Studies at the University of Michigan. She is the author and editor of a number of books, including GI Jews: How World War II Changed a Generation and, with Howard Rock, Cityscapes: A History of New York in Images. Jeffrey S. Gurock (Author) Jeffrey S. Gurock is Libby M. Klaperman Professor of Jewish History at Yeshiva University. He is author or editor of numerous books, including Orthodox Jews in America (Indiana University Press, 2009); The Jews of Harlem: The Rise, Decline, and Revival of a Jewish Community (NYU Press, 2016); and Parkchester: A Bronx Tale of Race and Ethnicity (NYU Press, 2019). Selected given his expertise on American Orthodoxy. Annie Polland (Author) Annie Polland is Executive Director of the American Jewish Historical Society. She was previously Executive Vice President for Programs and Education at the Lower East Side Tenement Museum, where she authored, Landmark of the Spirit: The Eldridge Street Synagogue. Daniel Soyer (Author) Daniel Soyer teaches history at Fordham University in the Bronx. He is the author of the prize-winning Jewish Immigrant Associations and American Identity in New York, 1880-1939, and co-editor and translator of My Future is in America: East European Jewish Immigrant Autobiographies. Diana L. Linden (Author) Diana L. Linden is author of Ben Shahn's New Deal Murals: Jewish Identity in the American Scene and co-editor of The Social and the Real: Political Art of the 1930s in the Western Hemisphere
Loading...
or support indie stores by buying on