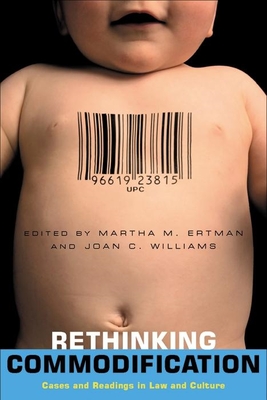 Cases and Readings in Law and Culture (Critical America #52)

What is the price of a limb? A child? Ethnicity? Love? In a world that is often ruled by buyers and sellers, those things that are often considered priceless become objects to be marketed and from which to earn a profit. Ranging from black market babies to exploitative sex trade operations to the marketing of race and culture, Rethinking Commodification presents an interdisciplinary collection of writings, including legal theory, case law, and original essays to reexamine the traditional legal question: ?To commodify or not to commodify?"
In this pathbreaking course reader, Martha M. Ertman and Joan C. Williams present the legal cases and theories that laid the groundwork for traditional critiques of commodification, which tend to view the process as dehumanizing because it reduces all human interactions to economic transactions. This "canonical" section is followed by a selection of original essays that present alternative views of commodification based on the concept that commodification can have diverse meanings in a variety of social contexts. When viewed in this way, the commodification debate moves beyond whether or not commodification is good or bad, and is assessed instead on the quality of the social relationships and wider context that is involved in the transaction. Rethinking Commodification contains an excellent array of contemporary issues, including intellectual property, reparations for slavery, organ transplants, and sex work; and an equally stellar array of contributors, including Richard Posner, Margaret Jane Radin, Regina Austin, and many others.

Martha M. Ertman is professor at the University of Utah S.J. Quinney College of Law.
Loading...
or support indie stores by buying on