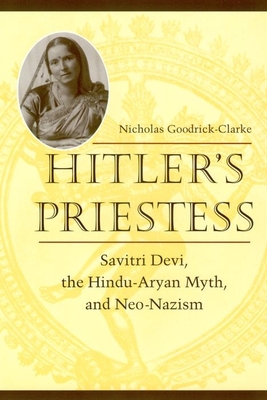 In this window onto the roots and evolution of international neo-Nazism, Nicholas Goodrick-Clarke reveals the powerful impact of one of fascism's most creative minds. Savitri Devi's influence on neo-Nazism and other hybrid strains of mystical fascism has been continuos since the mid-1960s. A Frenchwoman of Greek-English birth, Devi became an admirer of German National Socialism in the late 1920s. Deeply impressed by its racial heritage and caste-system, she emigrated to India, where she developed her racial ideology, in the early 1930s. Her works have been reissued and distributed through various neo-Nazi networks and she has been lionized as a foremother of Nazi ideology. Her appeal to neo-Nazi sects lies in the very eccentricity of her thought - combining Aryan supremacism and anti-Semitism with Hinduism, social Darwinisn, animal rights, and a fundamentally biocentric view of life - and has resulted in curious, yet potent alliances in radical ideology. As one of the earliest Holocaust deniers and the first to suggest that Adolf Hitler was an avatar-- a god come to earth in human form to restore the world to a golden age - Devi became a fixture in the shadowy neo-Nazi world. In Hitler's Priestess, Nicholas Goodrick-Clarke examines how someone with so little tangible connection to Nazi Germany became such a powerful advocate of Hitler's misanthropy. Hitler's Priestess illuminates the life of a woman who achieved the status of a prophetess for her penchant for redirecting authentic religious energies in the service of regenerate fascism.

Nicholas Goodrick-Clarke is the author of several books on ideology and the Western esoteric tradition, including "Hitler's Priestess" and "The Occult Roots of Nazism," which has remained in print since its publication in 1985 and has been translated into eight languages. He writes regularly for European and US Journals and has contributed to several films on the Third Reich and World War II.
or
Buy Here
Copyright © 2020 American Booksellers Association