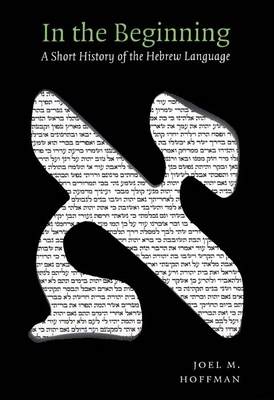 A Short History of the Hebrew Language

Hebrew as a language is just over 3,000 years old, and the story of its alphabet is unique among the languages of the world. Hebrew set the stage for almost every modern alphabet, and was arguably the first written language simple enough for everyone, not just scribes, to learn, making it possible to make a written record available to the masses for the first time.

Written language has existed for so many years--since around 3500 BCE--that most of us take it for granted. But as Hoffman reveals in this entertaining and informative work, even the idea that speech can be divided into units called "words" and that these words can be represented with marks on a page, had to be discovered. As Hoffman points out, almost every modern system of writing descends from Hebrew; by studying the history of this language, we can learn a good deal about how we express ourselves today.

Hoffman follows and decodes the adventure that is the history of Hebrew, illuminating how the written record has survived, the significance of the Dead Sea Scrolls and ancient translations, and attempts to determine how the language actually sounded. He places these developments into a historical context, and shows their continuing impact on the modern world.

This sweeping history traces Hebrew's development as one of the first languages to make use of vowels. Hoffman also covers the dramatic story of the rebirth of Hebrew as a modern, spoken language.

Packed with lively information about language and linguistics and history, In the Beginning is essential reading for both newcomers and scholars interested in learning more about Hebrew and languages in general.

Joel Hoffman lectures and teaches classes on biblical and rabbinic Hebrew and translation at Hebrew Union College-Jewish Institute of Religion. He is the head translator for Jewish Lights' multi-volume prayerbook and commentary series, "My People's Prayerbook." He lives in the NYC area.
Loading...
or support indie stores by buying on