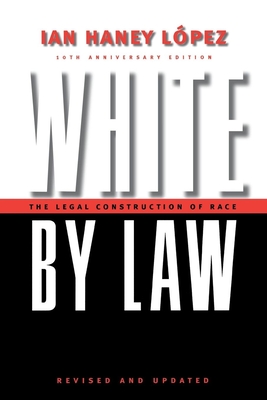 White by Law was published in 1996 to immense critical acclaim, and established Ian Haney L pez as one of the most exciting and talented young minds in the legal academy. The first book to fully explore the social and specifically legal construction of race, White by Law inspired a generation of critical race theorists and others interested in the intersection of race and law in American society. Today, it is used and cited widely by not only legal scholars but many others interested in race, ethnicity, culture, politics, gender, and similar socially fabricated facets of American society.

In the first edition of White by Law, Haney L pez traced the reasoning employed by the courts in their efforts to justify the whiteness of some and the non-whiteness of others, and revealed the criteria that were used, often arbitrarily, to determine whiteness, and thus citizenship: skin color, facial features, national origin, language, culture, ancestry, scientific opinion, and, most importantly, popular opinion.

Ten years later, Haney L pez revisits the legal construction of race, and argues that current race law has spawned a troubling racial ideology that perpetuates inequality under a new guise: colorblind white dominance. In a new, original essay written specifically for the 10th anniversary edition, he explores this racial paradigm and explains how it contributes to a system of white racial privilege socially and legally defended by restrictive definitions of what counts as race and as racism, and what doesn't, in the eyes of the law. The book also includes a new preface, in which Haney Lopez considers how his own personal experiences with white racial privilege helped engender White by Law.

Ian Haney Lopez is Professor of Law at Boalt Hall and author of White by Law (NYU Press) and Racism on Trial.
or support indie stores by buying on