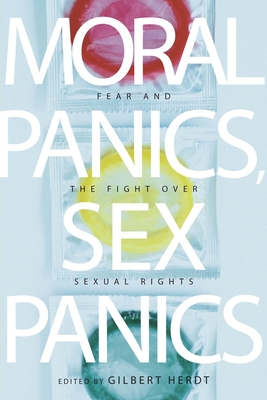 Fear and the Fight Over Sexual Rights (Intersections: Transdisciplinary Perspectives on Genders and Sexualities)

Finalist for 2010 LGBT Anthology Award from the Lambda Literary Awards

Unwed teen mothers, abortion, masturbation, pornography, gay marriage, sex trafficking, homosexuality, and HIV are just a few in a long line of issues that have erupted into panics. These sexual panics spark moral crusades and campaigns, defining and shaping how we think about sexual and reproductive rights. The essays in Moral Panics, Sex Panics focus on case studies ranging from sex education to AIDS to race and the "down low," to illustrate how sexuality is at the heart of many political controversies. The contributors also reveal how moral and sexual panics have become a mainstay of certain kinds of conservative efforts to win elections and gain power in moral, social, and political arenas. Moral Panics, Sex Panics provides new and important insights into the role that key moral panics have played in social processes, arguing forcefully against the political abuse of sex panics and for the need to defend full sexual and reproductive rights.

Gilbert Herdt is Professor and Founder of the Department of Sexuality Studies at San Francisco State University and author of Guardians of the Flutes, Third Sex, Third Gender, and Secrecy and Cultural Reality.
Loading...
or support indie stores by buying on