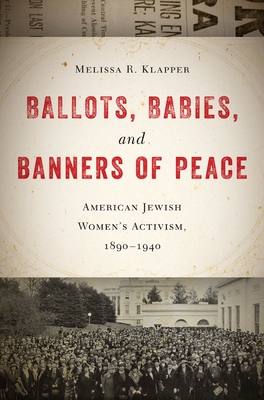 Ballots, Babies, and Banners of Peace


Ballots, Babies, and Banners of Peace explores the social and political activism of American Jewish women from 1890 to the beginnings of World War II.

Written in an engaging style, the book demonstrates that no history of the birth control, suffrage, or peace movements in the United States is complete without analyzing the impact of Jewish women's presence. The volume is based on years of extensive primary source research in more than a dozen archives and among hundreds of primary sources, many of which have previously never been seen. Voluminous personal papers and institutional records paint a vivid picture of a world in which both middle-class and working-class American Jewish women were consistently and publicly engaged in all the major issues of their day and worked closely with their non-Jewish counterparts on behalf of activist causes. This extraordinarily well-researched volume makes a unique contribution to the study of modern women's history, modern Jewish history, and the history of American social movements.

Melissa R. Klapper is a professor of history, Rowan University in Glassboro, NJ.
Loading...
or support indie stores by buying on