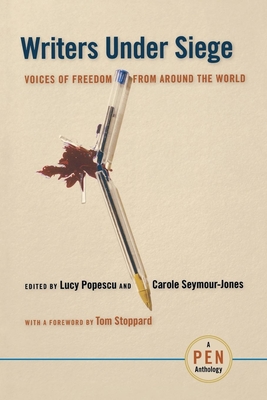 Voices of Freedom from Around the World (Pen Anthology)

The freedom to write is under threat today throughout the world, with more than 1,000 writers, journalists, and publishers known to be imprisoned or persecuted in more than 100 countries. Writers Under Siege bears witness to the power and danger of the pen, and to the powerful longing for the right to use it without fear. Collected here are fifty contributions by writers who have paid dearly for the privilege of writing. Some have been tortured; some have been killed. All understand the cost of speaking up and speaking out.
This book was prepared by PEN, which is both the world's oldest human rights organization and the oldest international literary organization. It commemorates PEN's eighty-fifth anniversary and celebrates PEN's work by giving voice to persecuted writers from around the globe. The contributors come from more than twenty countries, from Belarus to Zimbabwe. Many are well-known in the English-speaking world, including Orhan Pamuk, from Turkey, winner of the 2006 Nobel Prize for Literature; Harold Pinter, from England, winner of the 2005 Nobel Prize for Literature; Aung San Suu Kyi, from Burma, winner of the 1991 Nobel Peace Prize; and Anna Politkovskaya, from Russia, the noted journalist and author who was murdered in 2006, shortly after writing the piece that appears in this collection. Other contributors are less famous, perhaps, but their contributions are no less compelling. In prose and poetry, in fiction and non-fiction, they reveal the personal consequences of war, conflict, terrorism, and authoritarianism.
While the pieces collected here differ in their settings and their subjects, all are riveting. Grouped into four sections -- Prison, Death, Asylum, and The Freedom to Write -- they call our attention to the fundamental humanity we share and highlight the inhumanity we can so easily condone.
Contributors include: Chris Abani, Angel Cuadra Landrove, Asiye Guzel, Augusto Ernesto Llosa Giraldo, Mamadali Makhmudov, Orhan Pamuk, Harold Pinter, Anna Politkovskaya, Aung San Suu Kyi, Thich Tue Sy, Gai Tho, and Ken Saro-Wiwa.

Lucy Popescu has worked with PEN's Writers in Prison Committee for more than fifteen years. She writes a regular column for Literary Review.
or
Buy Here
Copyright © 2020 American Booksellers Association