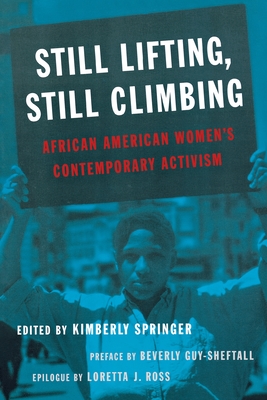 Still Lifting, Still Climbing is the first volume of its kind to document African American women's activism in the wake of the civil rights movement.

Ideal for course use, the volume includes original essays as well as primary source documents such as first-hand accounts of activism and statements of purpose. Each contributor carefully situates their topic within its historical framework, providing an accessible context for those unfamiliar with black women's history, and demonstrating that African American women's political agency does not emerge from a vacuum, but is part of a complex system of institutions, economics, and personal beliefs.

This ambitious volume will be an invaluable resource on the state of contemporary African American women's activism.

Kimberly Springer is Senior Lecturer in American Studies at King's College London. She specializes in social movements, mass media, and digital cultures.
Loading...
or support indie stores by buying on