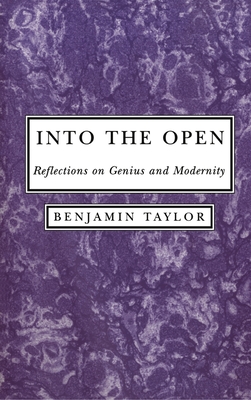 Reflections on Genius and Modernity

Into the Open is a philosophical and literary inquiry into the deeper meanings of genius. What precisely do we mean when we describe someone this way? What legacy do we invoke when we apply this term?

To address this question, Benjamin Taylor here explores how three great minds--Walter Pater, Paul Valry, and Sigmund Freud--viewed a figure widely considered the first great modern genius, Leonardo da Vinci. For each of these great thinkers, Da Vinci is of central importance because for each the received idea of genius has ceased to be a romantic certitude or sacred truth and has become a problem.

Invoking Nietzsche's drastic critique of genius, Taylor assesses the less programmatic and more anxious cases of Pater, Valry, and Freud. Whereas Nietzsche sought for and found an escape from romantic humanism, Pater, Valry, and Freud cannot relinquish the idea of genius and serve as troubled witnesses to the dilemma posed by the notion of genius. A myth of genius has been our way of making good the losses romantic modernity entails, Taylor writes, A myth of genius has existed to affirm that, among human lives, some have sacramental shape; that, among human lives, some put into abeyance the equation between life and loss. Such is the post-theological, post-metaphysical role into which we have compelled our geniuses. They make for us one last claim on the sublime.

A shift away from the special pleading that has lately plagued literary studies, Taylor's unfazed humanism reasserts the timeless standards of substantiveness, clarity, and grace.

Benjamin Taylor has taught at the New School for Social Research and Columbia University and each spring term is at Washington University in Saint Louis. His work has appeared in "Salmagundi," "Threepenny Review," "Raritan," "The Los Angeles Times Book Review," "New England Review," and many other publications. He is the author of a novel, "The Mercy Seat," forthcoming next year.
Loading...
or support indie stores by buying on