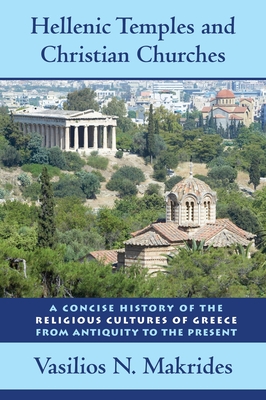 Covering an expanse of more than three thousand years, Hellenic Temples and Christian Churches charts, in one concise volume, the history of Greece's religious cultures from antiquity all the way through to present, post-independence Greece.

Focusing on the encounter and interaction between Hellenism and (Orthodox) Christianity, which is the most salient feature of Greece's religious landscape--influencing not only Greek religious history, but Greek culture and history as a whole--Vasilios N. Makrides considers the religious cultures of Greece both historically, from the ancient Greek through the Byzantine and the Ottoman periods up to the present, and systematically, by locating common characteristics and trajectoriesacross time. Weaving other traditions including Judaism and Islam into his account, Makrides highlights the patterns of development, continuity, and change that have characterized the country's long and unique religious history.

Contrary to the arguments of those who posit a single, exclusive religious culture for Greece, Makrides demonstrates the diversity and plurality that has characterized Greece's religious landscape across history. Beautifully written and easy to navigate, Hellenic Temples and Christian Churches offers an essential foundation for students, scholars, and the public on Greece's long religious history, from ancient Greece and the origins of Christianity to the formation of "Helleno-Christianity" in modern Greece.

Vasilios N. Makrides is Professor of Religious Studies specializing on Orthodox Christianity at the University of Erfurt, Germany.
or support indie stores by buying on
Copyright © 2020 American Booksellers Association