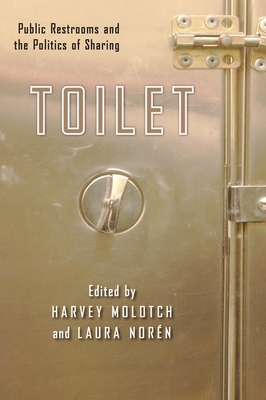 Public Restrooms and the Politics of Sharing

A sociological study of public restrooms

So much happens in the public toilet that we never talk about. Finding the right door, waiting in line, and using the facilities are often undertaken with trepidation. Don't touch anything. Try not to smell. Avoid eye contact. And for men, don't look down or let your eyes stray. Even washing one's hands are tied to anxieties of disgust and humiliation. And yet other things also happen in these spaces: babies are changed, conversations are had, make-up is applied, and notes are scrawled for posterity. Beyond these private issues, there are also real public concerns: problems of public access, ecological waste, and--in many parts of the world--sanitation crises. At public events, why are women constantly waiting in long lines but not men? Where do the homeless go when cities decide to close public sites? Should bathrooms become standardized to accommodate the disabled? Is it possible to create a unisex bathroom for transgendered people? In Toilet, noted sociologist Harvey Molotch and Laura Nor n bring together twelve essays by urbanists, historians and cultural analysts (among others) to shed light on the public restroom. These noted scholars offer an assessment of our historical and contemporary practices, showing us the intricate mechanisms through which even the physical design of restrooms--the configurations of stalls, the number of urinals, the placement of sinks, and the continuing segregation of women's and men's bathrooms--reflect and sustain our cultural attitudes towards gender, class, and disability. Based on a broad range of conceptual, political, and down-to-earth viewpoints, the original essays in this volume show how the bathroom--as a practical matter--reveals competing visions of pollution, danger and distinction. Although what happens in the toilet usually stays in the toilet, this brilliant, revelatory, and often funny book aims to bring it all out into the open, proving that profound and meaningful history can be made even in the can. Contributors: Ruth Barcan, Irus Braverman, Mary Ann Case, Olga Gershenson, Clara Greed, Zena Kamash, Terry Kogan, Harvey Molotch, Laura Nor n, Barbara Penner, Brian Reynolds, and David Serlin.

Harvey Molotch is Professor of Sociology and Professor in the Department of Social and Cultural Analysis at New York University. His books include Urban Fortunes: The Political Economy of Place (with John Logan, California 2007) and Where Stuff Comes From: How Toasters, Toilets, Cars, Computers and Many Other Things Come to Be as They Are (Routledge 2005), winner of the Eastern Sociological Association's Best Book Award.
Loading...
or support indie stores by buying on