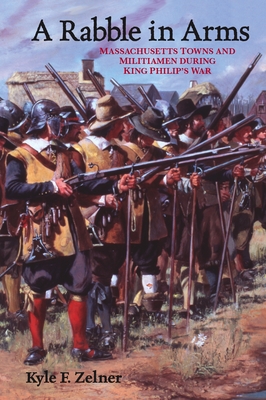 A Rabble in Arms

While it lasted only sixteen months, King Philip's War (1675-1676) was arguably one of the most significant of the colonial wars that wracked early America. As the first major military crisis to directly strike one of the Empire's most important possessions: the Massachusetts Bay Colony, King Philip's War marked the first time that Massachusetts had to mobilize mass numbers of ordinary, local men to fight. In this exhaustive social history and community study of Essex County, Massachusetts's militia, Kyle F. Zelner boldly challenges traditional interpretations of who was called to serve during this period.

Drawing on muster and pay lists as well as countless historical records, Zelner demonstrates that Essex County's more upstanding citizens were often spared from impressments, while the "rabble" --criminals, drunkards, the poor--were forced to join active fighting units, with town militia committees selecting soldiers who would be least missed should they die in action. Enhanced by illustrations and maps, A Rabble in Arms shows that, despite heroic illusions of a universal military obligation, town fathers, to damaging effects, often placed local and personal interests above colonial military concerns.

Kyle F. Zelner is Associate Professor of History and a Senior Fellow of the Center for the Study of War and Society at the University of Southern Mississippi.
Loading...
or support indie stores by buying on