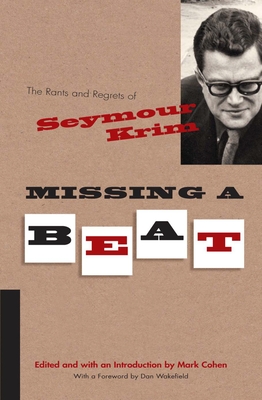 The Rants and Regrets of Seymour Krim

In 1961, Beat writer Seymour Krim set Greenwich Village on its ear with a slim volume of essays that featured an unleashed voice, a brash title, and a foreword by Norman Mailer. James Baldwin called Views of a Nearsighted Cannoneer an "extraordinary volume." Saul Bellow published an excerpt in his journal The Noble Savage, and Mailer saluted Krim's jazzy prose with its "shifts and shatterings of mood." Despite such praise and critical attention, Krim's work is excluded from most Beat anthologies and is little known outside literary circles. With Missing a Beat, a collection of eighteen essays by Krim published between 1957 and 1989, Cohen introduces this influential writer to a new generation.

In the Village Voice, New York Magazine, New York Times, and elsewhere, Krim pioneered a new style of subjective and personal reporting to write about the postwar American scene from a Jewish angle. Aggressively unacademic, Krim's journalism displays the "rapid, nervous, breathless tempo" that Irving Howe called a hallmark of Jewish literature. Krim outlived his early literary fame, but he produced an impressive body of work and was a tremendous prose stylist. Missing a Beat resurrects an American original, finding Krim a new literary home among such celebrated writers as Norman Mailer, David Mamet, and Saul Bellow.

Mark Cohen is a cultural critic and lecturer living in the San Francisco Bay Area. He is the author of numerous articles on Jewish American literature and popular culture and of the book Last Century of a Sephardic Community: The Jews of Monastir, 1839-1943.
or support indie stores by buying on
Copyright © 2020 American Booksellers Association