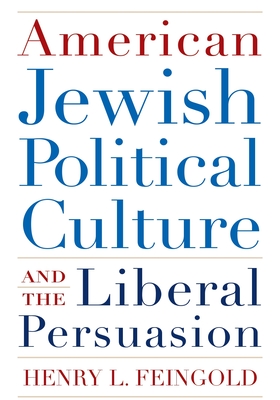 The sustained loyalty of the Jewish electorate to the Democratic Party while other ethnic voters cast their ballots elsewhere has long puzzled political pundits and chagrined Republican stalwarts. Efforts to turn the Jewish vote have thus far failed. The majority of Jewish voters continue to pull down the Democratic voting lever as if guided by some divine force. No Republican presidential candidate has won the Jewish vote since the election of Theodore Roosevelt in 1904.

Since the heady years of the New Deal, Jewish liberalism has found shelter under the left wing of that party, and Jewish voters have become some of the most politically engaged citizens of the republic. American Jewish Political Culture and the Liberal Persuasion searches for the source of such political engagement, exploring the constantly adapting liberalism at the heart of American Jewish political behavior. Drawing on sociology and philosophy to inform his historical synthesis of a centuries-long, transcontinental pattern, Feingold eschews voting statistics and political theory. Instead, he tells the story of three overarching concerns that weave throughout the political priorities of contemporary American Jews: an ever-changing definition of liberalism, the hope and turmoil of Israel, and the obsession with the Holocaust. The resulting tapestry reveals a culture of great complexity and a political voice that often lacks coherence despite these consistent threads. American Jewish Political Culture and the Liberal Persuasion begins with the historical background of American Jewish politics before delving into old roots and then moving on to a thematic understanding of American Jewry's political psyche. This exhaustive work answers the grand question of where American Jewish liberalism comes from and ultimately questions whether the communal motivations behind such beliefs are strong enough to withstand twenty-first-century America.

Henry L. Feingold is Professor Emeritus of history at the Graduate Center of the City University of New York and Baruch College. He is the author of several books, including The Politics of Rescue: The Roosevelt Administration and the Holocaust and Bearing Witness: How America and Its Jews Responded to the Holocaust.
Loading...
or support indie stores by buying on