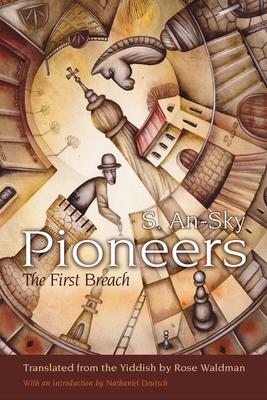 When young Zalmen Itzkowitz steps off the train on a dark, dreary day at the close of the nineteenth century, the residents of Miloslavka have no idea what's in store for them. Zalmen is a freethinker who has come to the rural town to earn his living as a tutor. Yet, rather than teach Hebrew, he plans to teach his students the Russian language and other secular subjects. Residents of the town quickly become divided, with some regarding Itzkowitz as the devil's messenger and others supportive of his progressive ideas. Set during the time of the Haskalah, the great Jewish Enlightenment that was sweeping through Europe, Pioneers is a charming tale of one ambivalent young man's attempt to join the movement and a compassionate portrait of one shtetl on the brink of transformation.

S. An-sky, pseudonym of Shloyme-Zanvl Rapoport (1863-1920), was a Russian Jewish writer, ethnographer, and cultural and political activist. He is best known today for his play The Dybbuk.Rose Waldman holds an MFA from Columbia University. Her translations have appeared as a chapbook, Married (an I. L. Peretz story), in Have I Got a Story for You (W. W. Norton), in Pakn Treger magazine, and in various literary journals. She was a 2014 and 2016 Yiddish Book Center Translation Fellow.
Loading...
or support indie stores by buying on