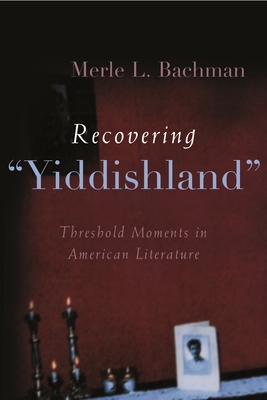 According to traditional narratives of assimilation, in the bargain made for an American identity, Jews freely surrendered Yiddish language and culture. Or did they? Recovering "Yiddishland" seeks to return readers to a threshold where Americanization also meant ambivalence and resistance. It reconstructs Yiddishland as a cultural space produced by Yiddish immigrant writers from the 1890s through the 1930s, largely within the sphere of New York.

Rejecting conventional literary history, the book spotlights threshold texts in the unjustly forgotten literary project of these writers--texts that reveal unexpected and illuminating critiques of Americanization. Merle Lyn Bachman takes a fresh look at Abraham Cahan's Yekl and Anzia Yezierska's Hungry Hearts, tracing in them a re-inscription of the Yiddish world that various characters seem to be committed to leaving behind. She also translates for the first time Yiddish poems featuring African-Americans that reflect the writers' confrontation with their passage, as Jews, into white identities. Finally, Bachman discusses the modernist poet Mikhl Likht, whose simultaneous embrace of American literature and resistance to assimilating into English marked him as the supreme threshold poet. Conscious of the risks of any postmodern--post-assimilation--attempt to recover the past, Bachman invents the figure of the Yiddish student, whose comments can reflect--and keep in check--the nostalgia and naivete of the returnee to Yiddish.

Merle L. Bachman is a poet and assistant professor of English at Spalding University in Louisville, Kentucky.
Loading...
or support indie stores by buying on