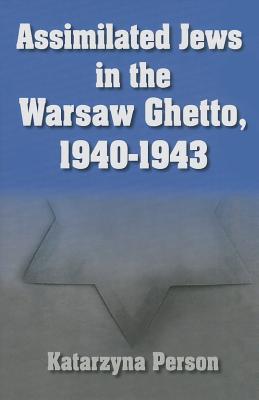 Jews in Nazi-occupied Warsaw during the 1940s were under increasing threat as they were stripped of their rights and forced to live in a guarded ghetto away from the non-Jewish Polish population. Within the ghettos, a small but distinct group existed: the assimilated, acculturated, and baptized Jews. Unwilling to integrate into the Jewish community and unable to merge with the Polish one, they formed a group of their own, remaining in a state of suspension throughout the interwar period. In 1940, with the closure of the Jewish residential quarter in Warsaw, their identity was chosen for them.

Person looks at what it meant for assimilated Jews to leave their prewar neighborhoods, understood as both a physical environment and a mixed Polish Jewish cultural community, and to enter a new, Jewish neighborhood. She reveals the diversity of this group and how its members' identity shaped their involvement in and contribution to ghetto life. In the first English-language study of this small but influential group, Person illuminates the important role of the acculturated and assimilated Jews in the history and memory of the Warsaw Ghetto.

Katarzyna Person is a researcher at the Jewish Historical Institute in Warsaw, Poland.
Loading...
or support indie stores by buying on