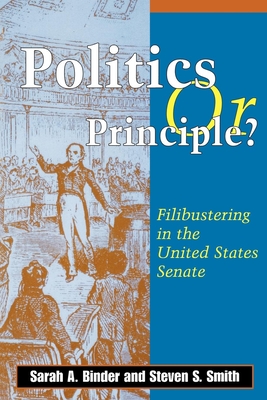 Filibustering in the United States Senate

Is American democracy being derailed by the United States Senate filibuster? Is the filibuster an important right that improves the political process or an increasingly partisan tool that delays legislation and thwarts the will of the majority? Are century-old procedures in the Senate hampering the institution from fulfilling its role on the eve of the 21st century?

The filibuster has achieved almost mythic proportions in the history of American politics, but it has escaped a careful, critical assessment for more than 50 years. In this book, Sarah Binder and Steven Smith provide such an assessment as they address the problems and conventional wisdom associated with the Senate's long-standing tradition of extended debate.

The authors examine the evolution of the rules governing Senate debate, analyze the consequences of these rules, and evaluate reform proposals. They argue that in an era of unprecedented filibustering and related obstructionism, old habits are indeed undermining the Senate's ability to meet its responsibilities. Binder and Smith scrutinize conventional wisdom about the filibuster--and show that very little of it is true. They focus on five major myths: that unlimited debate is a fundamental right to differentiate the Senate from the House of Representatives; that the Senate's tradition as a deliberative body requires unlimited debate; that the filibuster is reserved for a few issues of the utmost national importance; that few measures are actually killed by the filibuster; and that senators resist changing the rules because of a principled commitment to deliberation. In revising conventional wisdom about the filibuster, Binder and Smith contribute to ongoing debates about the dynamics of institutional change in the American political system. The authors conclude by suggesting reforms intended to enhance the power of determined majorities while preserving the rights of chamber minorities. They advocate, for example, lowering the number of votes required to end debate while increasing the amount of time for senators to debate controversial bills. Reform is possible, they suggest, that is consistent with the Senate's unique size and responsibilities.

Sarah Binder is a senior fellow in Governance Studies at the Brookings Institution and an associate professor of political science at George Washington University. Her previous books include Minority Rights, Majority Rule: Partisanship and the Development of Congress (Cambridge University Press, 1997). Steven S. Smith is the director of the Weidenbaum Center on the Economy, Government, and Public Policy at Washington University in St. Louis. He is the author of several books on congressional politics, including The American Congress (Houghton Mifflin, 1995) and Call to Order: Floor Politics in the House and Senate (Brookings, 1989).
Loading...
or
Not Currently Available for Direct Purchase