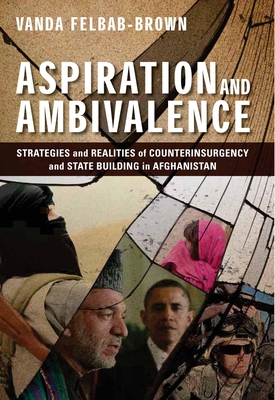 Strategies and Realities of Counterinsurgency and State-Building in Afghanistan

After more than a decade of great effort and sacrifice by America and its allies, the Taliban still has not been defeated, and many Afghans believe that a civil war is coming. Aspiration and Ambivalence analyzes the U.S. and international efforts in Afghanistan and offers detailed recommendations for dealing with the precarious situation leading up to the 2014 transition to Afghan control and beyond. Vanda Felbab-Brown argues that allied efforts in Afghanistan have put far too little emphasis on good governance, concentrating too much on short-term military goals to the detriment of long-term peace and stability. The Western tendency to ally with bullies, warlords, smugglers, and other shady characters in pursuit of short-term military advantage actually empowers the forces working against good governance and long-term political stability. Rampant corruption and mafia rule thus persist, making it impossible for Afghans to believe in the institutional reforms and rule of law that are clearly necessary. This must change-- otherwise, the chances of building responsive and sustainable governmental structures are slim, indeed.

Felbab-Brown combines thorough research and analysis with vivid personal accounts of her time spent in the war-torn nation--powerful vignettes illustrating the Afghan aspirations for peace, stability, and sovereignty and the stubborn obstacles to securing them.

"The year 2014 will mark a critical juncture in Afghanistan's odyssey. After more than a decade of arduous fighting and political involvement, the U.S. and international presence there will be significantly reduced and circumscribed. Although the international community has committed itself not to abandon Afghanistan as it did in the 1990s, the onus will be on the Afghan government to provide for the security of the country, its economic development, and governance that attempts to meet the needs of the Afghan people. Difficult challenges, major unresolved questions, and worrisome trends surround all three sets of processes. The biggest hole in the U.S. strategy and international efforts to stabilize the country is the failure to adequately address the country's fractured and brittle political system and very poor governance."--from Aspiration and Ambivalence

Vanda Felbab-Brown is a senior fellow with the 21st Century Defense Initiative and the Latin America Initiative in Foreign Policy at the Brookings Institution. A frequent commentator on international conflict management, counterinsurgency, organized crime, and illicit economies, she is the author of Shooting Up: Counterinsurgency and the War on Drugs (Brookings, 2009).
or
Not Currently Available for Direct Purchase
Copyright © 2020 American Booksellers Association