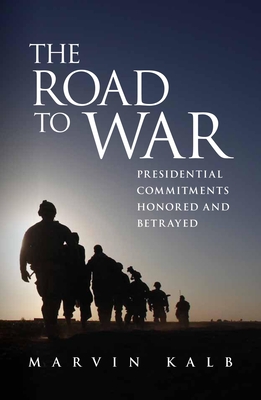 The Road to War (Hardcover)

Not since Pearl Harbor has an American president gone to Congress to request a declaration of war. Nevertheless, since then, one president after another, from Truman to Obama, has ordered American troops into wars all over the world. From Korea to Vietnam, Panama to Grenada, Lebanon to Bosnia, Afghanistan to Iraq--why have presidents sidestepped declarations of war? Marvin Kalb, former chief diplomatic correspondent for CBS and NBC News, explores this key question in his thirteenth book about the presidency and U.S. foreign policy.

Instead of a declaration of war, presidents have justified their war-making powers by citing "commitments," private and public, made by former presidents. Many of these commitments have been honored, but some betrayed. Surprisingly, given the tight U.S.-Israeli relationship, Israeli leaders feel that at times they have been betrayed by American presidents. Is it time for a negotiated defense treaty between the United States and Israel as a way of substituting for a string of secret presidential commitments?

From Israel to Vietnam, presidential commitments have proven to be tricky and dangerous. For example, one president after another committed the United States to the defense of South Vietnam, often without explanation. Over the years, these commitments mushroomed into national policy, leading to a war costing 58,000 American lives. Few in Congress or the media chose to question the war's provenance or legitimacy, until it was too late. No president saw the need for a declaration of war, considering one to be old-fashioned.

The word of a president can morph into a national commitment. It can become the functional equivalent of a declaration of war. Therefore, whenever a president "commits"the United States to a policy or course of action with, or increasingly without, congressional approval, watch out--the White House may be setting the nation on a road toward war.

The Road to War was a 2013 Foreword Reviews honorable mention in the subject of War & Military.

Marvin Kalb is the Edward R. Murrow Professor of Practice (Emeritus) at Harvard's Kennedy School of Government and founding director of the Shorenstein Center on the Press, Politics and Public Policy. He also serves as a guest scholar at the Brookings Institution in Foreign Policy Studies. His distinguished journalism career covers thirty years of award-winning reporting and commentary for CBS and NBC News, including stints as bureau chief in Moscow and host of Meet the Press. His twelve previous books include Haunting Legacy (Brookings Press, 2012), The Nixon Memo (University of Chicago) and Kissinger (Little Brown). He hosts the Kalb Report at the National Press Club.
or
Not Currently Available for Direct Purchase
Copyright © 2020 American Booksellers Association