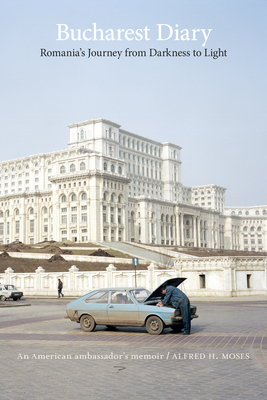 Romania's Journey from Darkness to Light

An insider's account of Romania's emergence from communism control

In the 1970s American attorney Alfred H. Moses was approached on the streets of Bucharest by young Jews seeking help to emigrate to Israel. This became the author's mission until the communist regime fell in 1989. Before that Moses had met periodically with Romania's communist dictator, Nicolae Ceausescu, to persuade him to allow increased Jewish emigration. This experience deepened Moses's interest in Romania--an interest that culminated in his serving as U.S. ambassador to the country from 1994 to 1997 during the Clinton administration.

The ambassador's time of service in Romania came just a few years after the fall of the Berlin Wall and the subsequent collapse of communism in Eastern Europe. During this period Romania faced economic paralysis and was still buried in the rubble of communism. Over the next three years Moses helped nurture Romania's nascent democratic institutions, promoted privatization of Romania's economy, and shepherded Romania on the path toward full integration with Western institutions. Through frequent press conferences, speeches, and writings in the Romanian and Western press and in his meetings with Romanian officials at the highest level, he stated in plain language the steps Romania needed to take before it could be accepted in the West as a free and democratic country.

Bucharest Diary: An American Ambassador's Journey is filled with firsthand stories, including colorful anecdotes, of the diplomacy, both public and private, that helped Romania recover from four decades of communist rule and, eventually, become a member of both NATO and the European Union. Romania still struggles today with the consequences of its history, but it has reached many of its post-communist goals, which Ambassador Moses championed at a crucial time.

This book will be of special interest to readers of history and public affairs--in particular those interested in Jewish life under communist rule in Eastern Europe and how the United States and its Western partners helped rebuild an important country devastated by communism.

Alfred H. Moses is a Washington attorney, author, and former partner in a major Washington law firm. He was special counsel to President Carter (1980-81), U.S. ambassador to Romania (1994-97), and special presidential envoy for the Cyprus conflict (1999-2001). He was national president of the American Jewish Committee immediately before becoming ambassador. Presently chairman of UN Watch (Geneva), he has written several books and numerous articles appearing in the New York Times, the Washington Post, and other periodicals in the United States, Europe, and Israel. In 2002 he was awarded Romania's Marc Cruce Medal (Order For Merit) by President Ion Iliescu of Romania, the only American to have been so honored.
Loading...
or support indie stores by buying on