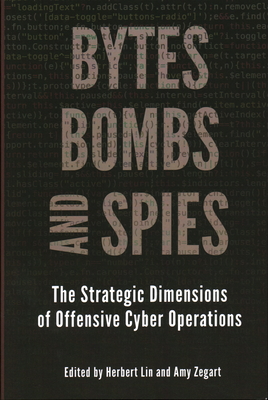 "We are dropping cyber bombs. We have never done that before."--U.S. Defense Department official

A new era of war fighting is emerging for the U.S. military. Hi-tech weapons have given way to hi tech in a number of instances recently:

A computer virus is unleashed that destroys centrifuges in Iran, slowing that country's attempt to build a nuclear weapon.

ISIS, which has made the internet the backbone of its terror operations, finds its network-based command and control systems are overwhelmed in a cyber attack.

A number of North Korean ballistic missiles fail on launch, reportedly because their systems were compromised by a cyber campaign.

Offensive cyber operations like these have become important components of U.S. defense strategy and their role will grow larger. But just what offensive cyber weapons are and how they could be used remains clouded by secrecy.

This new volume by Amy Zegart and Herb Lin is a groundbreaking discussion and exploration of cyber weapons with a focus on their strategic dimensions. It brings together many of the leading specialists in the field to provide new and incisive analysis of what former CIA director Michael Hayden has called "digital combat power" and how the United States should incorporate that power into its national security strategy.

Dr. Herb Lin is senior research scholar for cyber policy and security at the Center for International Security and Cooperation and Hank J. Holland Fellow in Cyber Policy and Security at the Hoover Institution, both at Stanford University.Amy Zegart is a senior fellow at the Freeman Spogli Institute of International Studies (FSI), professor of political science (by courtesy) at Stanford University, and a contributing editor to The Atlantic. She is also the Davies Family Senior Fellow at the Hoover Institution, where she directs the Robert and Marion Oster National Security Affairs Fellows program. She is founder and co-director of the Stanford Cyber Policy Program.
or
Buy Here
Copyright © 2020 American Booksellers Association