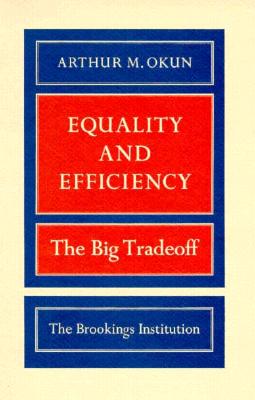 Contemporary American society has the look of a split-level structure. Its political and social institutions distribute rights and privileges universally and proclaim the equality of all citizens. Yet economic institutions, with efficiency as their guiding principle, create disparities among citizens in living standards and material welfare. This mixture of equal rights and unequal economic status breeds tensions between the political principles of democracy and the economic principles of capitalism. Whenever the wealthy try for extra helpings of supposedly equal rights, and whenever the workings of the market deny anyone a minimum standard of living, " dollars transgress on rights" --in the author's phrase. In this revised and expanded version of the Godkin Lectures presented at the John F. Kennedy School at Harvard University in April 1974, Arthur M. Okun explores the conflicts that arise when society's desire to reduce inequality would impair economic efficiency, confronting policymakers with " the big tradeoff." Other economic systems have attempted to solve this problem; but the best of socialist experiments have achieved a greater degree of equality than our mixed capitalist democracy only at heavy costs in efficiency, and dictatorial governments have reached heights of efficiency only by rigidly repressing their citizenry. In contrast, our basic system emerges as a viable, if uneasy, compromise in which the market has its place and democratic institutions keep it in check. But within the existing system there are ways to gain more of one good thing at a lower cost in terms of the other. In Okun's view, society's concern for human dignity can be directed atreducing the economic deprivation that stains the record of American democracy--through progressive taxation, transfer payments, job programs, broadening equality of opportunity, eliminating racial and sexual discrimination, and lowering barriers to access to capital.