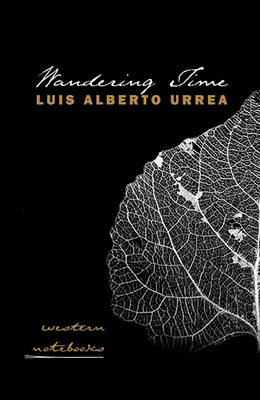 Fleeing a failed marriage and haunted by ghosts of his past, Luis Alberto Urrea jumped into his car and headed west. Driving cross-country with a cat named Rest Stop, Urrea wandered the West from one year’s spring through the next.

Hiking into aspen forests where leaves “shiver and tinkle like bells” and poking alongside creeks in the Rockies, he sought solace and wisdom. In the forested mountains he learned not only the names of trees—he learned how to live. As nature opened Urrea’s eyes, writing opened his heart. In journal entries that sparkle with discovery, Urrea ruminates on music, poetry, and the landscape. With wonder and spontaneity, he relates tales of marmots, geese, bears, and fellow travelers. He makes readers feel mountain air “so crisp you feel you could crunch it in your mouth” and reminds us all to experience the magic and healing of small gestures, ordinary people, and common creatures.

Urrea has been heralded as one of the most talented writers of his generation. In poems, novels, and nonfiction, he has explored issues of family, race, language, and poverty with candor, compassion, and often astonishing power. Wandering Time offers his most intimate work to date, a luminous account of his own search for healing and redemption.

“Wandering Time pays homage to Urrea’s literary heroes from Basho to Brautigan and Bukowski. It provides a great balance of stream of consciousness, slice-of-life anecdotes, and valuable writing advice.”—Fjords Review

“His stream-of-consciousness entries, filled with Urrea’s playful, introspective language, help him exorcise personal demons while painting vivid, original portraits of nature and the people who roam through it.”—Latina

“At once personal and universal, written with the introspection and intimacy of the journal and the notebook as well as with the reverence and attention of nature writing.”—World Literature Today

“This is a book about letting go and starting over—about what is important enough to put into your pocket.”—Foreword Magazine

Luis Alberto Urrea, 2005 Pulitzer Prize finalist for nonfiction and member of the Latino Literature Hall of Fame, is a prolific and acclaimed writer who uses his dual-culture life experiences to explore greater themes of love, loss and triumph.The critically acclaimed and best-selling author of 13 books, Urrea has won numerous awards for his poetry, fiction and essays. The Devil's Highway, his 2004 non-fiction account of a group of Mexican immigrants lost in the Arizona desert, won the Lannan Literary Award and was a finalist for the Pulitzer Prize and the Pacific Rim Kiriyama Prize. An historical novel, The Hummingbird's Daughter tells the story of Teresa Urrea, sometimes known as the Saint of Cabora and the Mexican Joan of Arc. After serving as a relief worker in Tijuana and a film extra and columnist-editor-cartoonist for several publications, Urrea moved to Boston where he taught expository writing and fiction workshops at Harvard. He has also taught at Massachusetts Bay Community College and the University of Colorado and he was the writer in residence at the University of Louisiana-Lafayette.

Urrea lives with his family in Naperville, IL, where he is a professor of creative writing at the University of Illinois-Chicago.