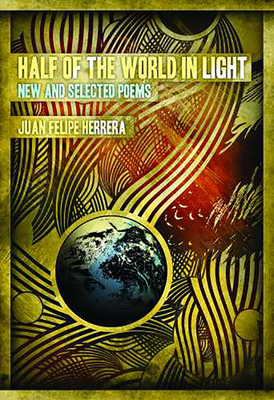 Half of the World in Light

For nearly four decades, Juan Felipe Herrera has documented his experience as a Chicano in the United States and Latin America through stunning, memorable poetry that is both personal and universal in its impact, themes, and approach. Often political, never fainthearted, his career has been marked by tremendous virtuosity and a unique sensibility for uncovering the unknown and the unexpected. Through a variety of stages and transformations, Herrera has evolved more than almost any other Chicano poet, always re-inventing himself into a more mature and seasoned voice.

Now, in this unprecedented collection, we encounter the trajectory of this highly innovative and original writer, bringing the full scope of his singular vision into view. Beginning with early material from A Certain Man, the volume moves through thirteen of Herrera’s collections into new, previously unpublished work. Serious scholars and readers alike will now have available to them a representative set of glimpses into his production as well as his origins and personal development. The ultimate value of bringing together such a collection, however, is that it will allow us to better understand and appreciate the complexity of what this major American poet is all about.

Praise For Half of the World in Light: New and Selected Poems (Camino del Sol )…

“Many poets since the 1960s have dreamed of a new hybrid art, part oral, part written, part English, part something else: an art grounded in ethnic identity, fueled by collective pride, yet irreducibly individual too. Many poets have tried to create such an art: Herrera is one of the first to succeed.”—New York Times

“In Half of the World in Light, the import of Juan Felipe Herrera’s nearly forty years of work is on full display, and there is no adjective to describe the immensity of it. Reinventing himself from book to book and even poem to poem, he is a virtuoso of language and society.”—American Poet
“Juan Felipe Herrera casts the Chicano experience of the last four decades into the vanguard of American letters. The poems gathered here are reflections of fertility, revival songs steering us toward freedom. Few poets in the history of this America have been so unshackled as to reinvent the art form at the turn of every page.”—Matthew Shenoda, author of Somewhere Else

“Juan Felipe Herrera has turned the anthology into an enviable work of art by creating a work that stands on its own. This collection is bound to become a landmark.”—Francisco A. Lomelí, co-editor of Chicano Sketches: Short Stories by Mario Suárez

“In Herrera’s magical universe we encounter everyday human experiences interwoven with the surreal, the unexpected, and the extraordinary. It is, nevertheless, a poetic world inextricably linked to family, friends, and community while never forgetting the political dimensions of life. Herrera’s poetic imaginary challenges the intellect and nourishes the soul—it is indeed a tour de force in Chicano poetic expression.”—María Herrera-Sobek, author of Chicano Folklore: A Handbook

“The rich, chromatic imagery, the lyrical tone, and the flowing rhythm make the reading of this collection a profound experience, an experience not easily forgotten.”—Luis Leal, author of A Luis Leal Reader

After serving as chair of the Chicano and Latin American Studies Department at California State University–Fresno, in 2005 Juan Felipe Herrera joined the Creative Writing Department at the University of California–Riverside, as Tomas Rivera Endowed Chair and director of the Art and Barbara Culver Center for the Arts, a new multimedia space in downtown Riverside. In 1990 he was a teaching fellow with the Distinction of Excellence at the University of Iowa Writers’ Workshop. Also, he has taught at the New College of San Francisco and Stanford University.
During the last three decades, Juan Felipe has received numerous awards and fellowships, such as two National Endowment for the Arts Writers’ Fellowships, four California Arts Council grants, the UC Berkeley Regents’ Fellowship, the Breadloaf Fellowship in Poetry, and the Stanford Chicano Fellows Fellowship. He has given lectures, workshops, readings, and performances of his work and writing throughout the nation.

Juan Felipe is also an actor, with appearances on film and stage. He recently produced “The Twin Tower Songs,” a San Joaquin Valley performance memorial on the September 11th tragedy, and he writes poetry sequences for the PBS television series American Family. His 2004 musical, The Upside Down Boy, was well received in New York City (attended by 9,000 K–6 students). It was produced by Making Books Sing, with libretto by Barbara Zinn Krieger, lyrics by Juan Felipe Herrera, and music by Cristian Amigo. More recently, he wrote the libretto and lyrics for Salsalandia, a commission for the La Jolla Playhouse.

Juan Felipe is a board member of the Before Columbus American Book Awards Foundation. He received his B.A. in social anthropology from the University of California at Los Angeles, his M.A. in social anthropology from Stanford, and his M.F.A. in creative writing from the Writers’ Workshop at the University of Iowa. Juan Felipe often travels and performs with his partner, Margarita Robles, a poet and performance artist.