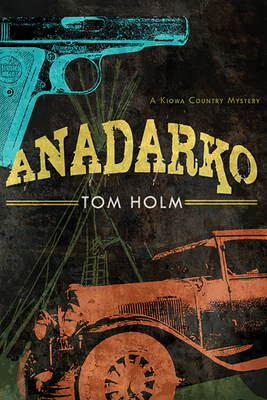 Anadarko, a small bootlegger town in Oklahoma’s Kiowa Country, shakes off its sleepy veneer when J.D. Daugherty, an Irish ex-cop turned private eye, and Hoolie Smith, a Cherokee war veteran, show up to investigate the mysterious disappearance of oilman and geologist Frank Shotz.

J.D. and Hoolie find their simple missing person case hides a web of murder, graft, and injustice tied to a network of bootleggers with links to the Ku Klux Klan. Set in the aftermath of the violent Tulsa race riot of 1921, Anadarko reveals a deadly and corrupt town filled with a toxic cocktail of booze, greed, and bigotry.

Tackling racial prejudice head-on, author Tom Holm expertly weaves a vivid and suspenseful tale set in Prohibition-era Indian Country. This gritty whodunit shows nothing is ever simple in the fight between good and evil.

“Like a master juggler, Holm tosses up one plot line after another, spins them in dizzying circles, then one by one, resolves them to an ending that not only satisfies but also provides yet one more surprising plot spin.”—Frances Washburn, author of The Red Bird All-Indian Traveling Band

“A nasty picture of how far the Klan reached into everyday life, reflections on Native American culture and religion, and a gallery of fascinating characters are all woven into a complex mystery.”—Kirkus

“This novel does a beautiful job of addressing loaded issues while also successfully infusing the classic formula of the whodunit with innovative and often-surprising twists and turns.”—Lisa M. Tatonetti, author of The Queerness of Native American Literature

“In Anadarko: A Kiowa Country Mystery, private eye J.D. Daugherty, an Irish cop-turned-investigator, and his partner Hoolie Smith, a Cherokee mechanic, set off to solve another murder in Indian Country. The eccentric private eye and his sidekick confront not only the political intrigues of bootlegging and battles over American Indian headrights but also the violence of the Ku Klux Klan in Oklahoma in the 1920s. This historical background adds conflict and depth to this riveting mystery.”—Susanne Bloomfield, co-editor of Adventures in the West: Stories for Young Readers

“Will intrigue readers who like detailed historical scene-setting with their crime fiction.”—Booklist

“Anadarko is an intelligent mystery that achieves cultural sensitivity, making room for Native American customs that are treated as both sacred and crucial to restoring justice.”—Foreword Reviews
or
Not Currently Available for Direct Purchase
Copyright © 2020 American Booksellers Association