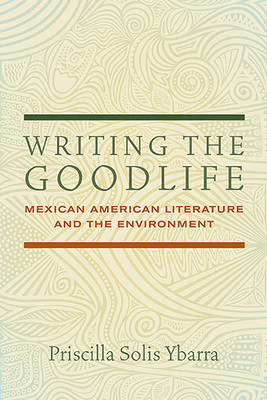 Mexican American Literature and the Environment

Winner of the Western Literature Association’s 2017 Thomas J. Lyon Book Award in Western American Literary and Cultural Studies
Mexican American literature brings a much-needed approach to the increasingly urgent challenges of climate change and environmental injustice. Although current environmental studies work to develop new concepts, Writing the Goodlife looks to long-established traditions of thought that have existed in Mexican American literary history for the past century and a half. During that time period, Mexican American writing consistently shifts the focus from the environmentally destructive settler values of individualism, domination, and excess toward the more beneficial refrains of community, non-possessiveness, and humility. The decolonial approaches found in these writings provide rich examples of mutually respectful relations between humans and nature, an approach that Priscilla Solis Ybarra calls “goodlife” writing.

Goodlife writing has existed for at least the past century, Ybarra contends, but Chicana/o literary history’s emphasis on justice and civil rights eclipsed this tradition and hidden it from the general public’s view. Likewise, in ecocriticism, the voices of people of color most often appear in deliberations about environmental justice. The quiet power of goodlife writing certainly challenges injustice, to be sure, but it also brings to light the decolonial environmentalism heretofore obscured in both Chicana/o literary history and environmental literary studies.

Ybarra’s book takes on two of today’s most discussed topics—the worsening environmental crisis and the rising Latino population in the United States—and puts them in literary-historical context from the U.S.-Mexico War up to today’s controversial policies regarding climate change, immigration, and ethnic studies. This book uncovers 150 years’ worth of Mexican American and Chicana/o knowledge and practices that inspire hope in the face of some of today’s biggest challenges.

Praise For Writing the Goodlife: Mexican American Literature and the Environment…

“Ybarra provides the sort of comprehensive consideration of the temporal, spatial, spiritual, and environmental attributes involved in the relationship between place and identity that our scholarship needs to address”—Western American Literature

“Writing the Goodlife stands out for its astute selection of Mexican American and Chicana/o texts and for its convincing claim that the environmental justice rubric that dominates ecocritical readings of such texts has further marginalized forms of cultural expression and knowledge.”—American Literature

“Ybarra’s stellar work is original; there is no other work like it. She has undertaken a sustained analysis of Mexican American writing as this relates to environmental issues.”—María Herrera-Sobek, Associate Vice Chancellor for Diversity, Equity, and Academic Policy, University of California, Santa Barbara

“A valuable contribution to the field of Chicana/o ecocriticism.”—Cheryll Glotfelty, co-editor of The Bioregional Imagination: Literature, Ecology, and Place

"Writing the Goodlife offers a timely, lucid, elegant and always compelling analysis of a broad swath of literature. . . It shows how tremendously important ecological and environmental thinking have been to Mexican American letters for more than a century. With this text Ybarra also creates a literary history that suggests a hitherto unrecognized tradition of ecological meditation in literary form. Writing the Goodlife broadens our understanding of Chicana literature and ecocriticism in significant new ways.”—Mary Pat Brady, author of Extinct Lands, Temporal Geographies: Chicana Literature and the Urgency of Space

Priscilla Solis Ybarra is an assistant professor of Latina/o literature in the Department of English at the University of North Texas.
Loading...
or
Not Currently Available for Direct Purchase