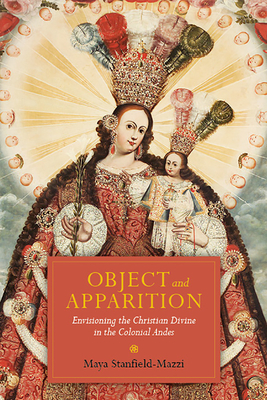 Envisioning the Christian Divine in the Colonial Andes

When Christianity was imposed on Native peoples in the Andes, visual images played a fundamental role, yet few scholars have written about this significant aspect. Object and Apparition proposes that Christianity took root in the region only when both Spanish colonizers and native Andeans actively envisioned the principal deities of the new religion in two- and three-dimensional forms. The book explores principal works of art involved in this process, outlines early strategies for envisioning the Christian divine, and examines later, more effective approaches.

Maya Stanfield-Mazzi demonstrates that among images of the divine there was constant interplay between concrete material objects and ephemeral visions or apparitions. Three-dimensional works of art, specifically large-scale statues of Christ and the Virgin Mary, were key to envisioning the Christian divine, the author contends. She presents in-depth analysis of three surviving statues: the Virgins of Pomata and Copacabana (Lake Titicaca region) and Christ of the Earthquakes from Cusco.

Two-dimensional painted images of those statues emerged later. Such paintings depicted the miracle-working potential of specific statues and thus helped to spread the statues’ fame and attract devotees. “Statue paintings” that depict the statues enshrined on their altars also served the purpose of presenting images of local Andean divinities to believers outside church settings.

Stanfield-Mazzi describes the unique features of Andean Catholicism while illustrating its connections to both Spanish and Andean cultural traditions. Based on thorough archival research combined with stunning visual analysis, Object and Apparition analyzes the range of artworks that gave visual form to Christianity in the Andes and ultimately caused the new religion to flourish.

Maya Stanfield-Mazzi is an assistant professor of art history at the University of Florida. She is currently researching liturgical textiles of colonial Peru.

Praise For Object and Apparition: Envisioning the Christian Divine in the Colonial Andes…

“This is a complicated subject that has been approached in a variety of ways, and it is gratifying to find them brought together in a single, lucidly presented volume.”—Suzanne L. Stratton-Pruitt, editor of The Art of Painting in Colonial Quito

“Based on solid and thorough archival research combined with stunning visual analysis, Stanfield-Mazzi argues that images of Andean origin respond to some pre-Hispanic concepts. More importantly, she demonstrates that Andeans were active agents in Catholic image-making, creating and articulating a particularly Andean version of Catholicism.”—Carolyn Dean, author of A Culture of Stone: Inka Perspectives on Rock

“A richly documented, well-illustrated book that studies the proliferation of miraculous images in the southern highlands of sixteenth- and seventeenth-century Peru.”—The Catholic Historical Review
or
Not Currently Available for Direct Purchase
Copyright © 2020 American Booksellers Association