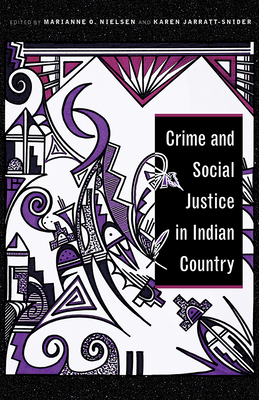 In Indigenous America, human rights and justice take on added significance. The special legal status of Native Americans and the highly complex jurisdictional issues resulting from colonial ideologies have become deeply embedded into federal law and policy. Nevertheless, Indigenous people in the United States are often invisible in discussions of criminal and social justice.

Crime and Social Justice in Indian Country calls to attention the need for culturally appropriate research protocols and critical discussions of social and criminal justice in Indian Country. The contributors come from the growing wave of Native American as well as non-Indigenous scholars who employ these methods. They reflect on issues in three key areas: crime, social justice, and community responses to crime and justice issues. Topics include stalking, involuntary sterilization of Indigenous women, border-town violence, Indian gaming, child welfare, and juvenile justice. These issues are all rooted in colonization; however, the contributors demonstrate how Indigenous communities are finding their own solutions for social justice, sovereignty, and self-determination.

Thanks to its focus on community responses that exemplify Indigenous resilience, persistence, and innovation, this volume will be valuable to those on the ground working with Indigenous communities in public and legal arenas, as well as scholars and students. Crime and Social Justice in Indian Country shows the way forward for meaningful inclusions of Indigenous peoples in their own justice initiatives.

“This book is an excellent cross section of Indigenous scholarship that is reclaiming Indigenous narratives and research in ways that value and explore Indigenous ways of being and knowing, while also addressing areas of critical concern to Indigenous peoples.”—KIVA

“The challenge by many writers in this collec­tion to problematize state recognition and uphold traditional laws in modern ways was refreshing and inspiring.”—American Indian Culture and Research Journal

“A much-needed collection of sociological essays that investigate important social issues such as crime, justice, and sovereignty within Native communities.”—Library Journal

“This book promises great things for the series and provides Indigenous insight into the problems of crime and social injustice as functions of continued colonialism.”—Choice

“This enlightening collection of essays is a powerful call for more attention to American Indians neglected by the criminal justice system. This intrinsic book tells us that indigenous justice is not the same as white justice in America.”—Donald L. Fixico, Distinguished Foundation Professor of History, Arizona State University

“A well-written, jargon-free book, featuring unusual and effective approaches to topics such as tribal sovereignty, and enhanced by the editors’ distinctive perspectives.”—Nicholas Peroff, Henry W. Bloch School of Management, University of Missouri-Kansas City