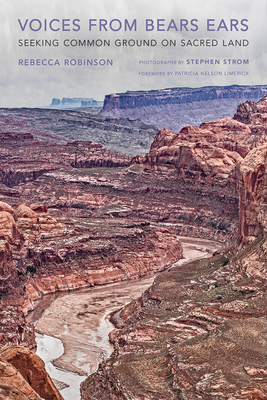 In late 2016, President Barack Obama designated 1.35 million acres of public lands in southeastern Utah as Bears Ears National Monument. On December 4, 2017, President Donald Trump shrank the monument by 85 percent. A land rich in human history and unsurpassed in natural beauty, Bears Ears is at the heart of a national debate over the future of public lands.

Through the stories of twenty individuals, and informed by interviews with more than seventy people, Voices from Bears Ears captures the passions of those who fought to protect Bears Ears and those who opposed the monument as a federal “land grab” that threatened to rob them of their economic future. It gives voice to those who have felt silenced, ignored, or disrespected. It shares stories of those who celebrate a growing movement by Indigenous peoples to protect ancestral lands and culture, and those who speak devotedly about their Mormon heritage. What unites these individuals is a reverence for a homeland that defines their cultural and spiritual identity, and therein lies hope for finding common ground.

Journalist Rebecca Robinson provides context and perspective for understanding the ongoing debate and humanizes the abstract issues at the center of the debate. Interwoven with these stories are photographs of the interviewees and the land they consider sacred by photographer Stephen E. Strom. Through word and image, Robinson and Strom allow us to both hear and see the people whose lives are intertwined with this special place.

Rebecca Robinson is a Portland, Oregon–based writer. Her work has been widely published, and she has received numerous awards for her work in print, radio, and online media. Voices from Bears Ears is her first book.

Stephen E. Strom received his PhD in astronomy from Harvard University in 1964. Strom’s photographic work is held in several permanent collections, including the Center for Creative Photography in Tucson. His most recent book is Bears Ears: Views from a Sacred Land.

“Here is an important breakthrough book—beautiful to look at and heartening to read. By listening keenly to the people whose roots go deep into the swirling sandstone of Bears Ears country, by looking respectfully into the faces of the high cliffs and the equally expressive faces of the people who love this land, Robinson and Strom give us an impressive example of what it will take to find common ground.”—Kathleen Dean Moore, author of Great Tide Rising

“Protection of Bears Ears as a sacred cultural landscape was an historic step forward, a watershed moment too quickly shattered. This insightful book keeps a deep conversation between land and people alive and provides hope that western culture will continue that dialogue as we learn to honor and respect sacred lands.”—Christopher “Toby” McLeod, Sacred Land Film Project