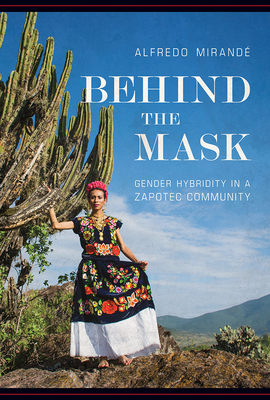 Gender Hybridity in a Zapotec Community

The image of biologically male people dancing while dressed in the traditional, colorful attire of Zapotec, Juchiteca, females stands in sharp contrast to the prevailing view of Mexico as the land of charros, machismo, and unbridled ranchero masculinity. These indigenous people are called los muxes, and they are neither man nor woman, but rather a hybrid third gender.

After seeing a video of a muxe vela, or festival, sociologist Alfredo Mirandé was intrigued by the contradiction between Mexico’s patriarchal reputation and its warm acceptance of los muxes. Seeking to get past traditional Mexican masculinity, he presents us with Behind the Mask, which combines historical analysis, ethnographic field research, and interviews conducted with los muxes of Juchitán over a period of seven years. Mirandé observed community events, attended muxe velas, and interviewed both muxes and other Juchitán residents. Prefaced by an overview of the study methods and sample, the book challenges the ideology of a male-dominated Mexican society driven by the cult of machismo, featuring photos alongside four appendixes.

Delving into many aspects of their lives and culture, the author discusses how the muxes are perceived by others, how the muxes perceive themselves, and the acceptance of a third gender status among various North American indigenous groups. Mirandé compares traditional Mexicano/Latino conceptions of gender and sexuality to modern or Western object choice configurations. He concludes by proposing a new hybrid model for rethinking these seemingly contradictory and conflicting gender systems.

Praise For Behind the Mask: Gender Hybridity in a Zapotec Community…

“Drawing on his fieldwork in this community as well as in-depth interviews with muxes, Mirandé demystifies some of these beliefs, offering critical insights while painting a vivid picture of muxes, their understandings of themselves, their interactions with others, and the degree to which they find acceptance within Juchitán. In the process, he paints a more nuanced picture of gender in Mexico, situates muxes within broader Indigenous models of gender, and employs this case study to advance theoretical insights on gender.”—Choice

“A highly original work, featuring vivid and compelling descriptions of a unique gender identity and its acceptance in a twenty-first-century Mexican setting, with the potential to broaden several current frameworks in the gender field.”—Maxine Baca Zinn, Michigan State University

A native of Mexico City, Alfredo Mirandé is distinguished professor of sociology and ethnic studies at the University of California, Riverside. He is the author of many articles in academic journals and nine books, including La Chicana: The Mexican-American Woman (co-authored with Evangelina Enríquez), Jalos, USA: Transnational Community and Identity, Rascuache Lawyer: Toward a Theory of Ordinary Litigation, and Hombres y Machos: Masculinity and Latino Culture.