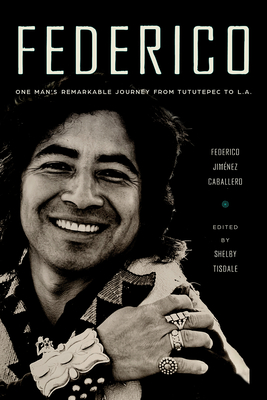 One Man’s Remarkable Journey from Tututepec to L.A.

From the day he was born, Federico Jiménez Caballero was predicted to be a successful man. So, how exactly did a young boy from Tututepec, Oaxaca, become a famous Indigenous jewelry artist and philanthropist in Los Angeles? Federico tells the remarkable story of willpower, curiosity, hard work, and passion coming together to change one man’s life forever.

As a child growing up in a small rural town in southern Mexico, Federico Jiménez Caballero faced challenges that most of us cannot imagine, let alone overcome. From a young age, Federico worked tirelessly to contribute to his large family, yet his restless spirit often got him into trouble. Finding himself in the middle of a village-wide catastrophe, he was exiled to a boarding school in Oaxaca City where he was forced to become independent, resilient, and razor-sharp in order to stay afloat. Through his incredible people skills, bravery, and a few nudges from his bold mother, Federico found himself excelling in his studies and climbing the ranks in Oaxaca City. He always held a deep love and respect for his Mixtec Indigenous roots and began to collect Indigenous jewelry and textiles. Through a series of well-timed connections, Federico met his wife Ellen, and, shortly afterward, he came to the United States as a researcher at the University of California, Los Angeles, in the late 1960s.

Carrying his passion for Indigenous jewelry with him from Oaxaca, Federico owned a series of shops in Los Angeles and sold jewelry at flea markets to well-known Hollywood stars. Over the years, he cultivated relationships and became a philanthropist as well as the owner of a museum in Oaxaca City. This book is the inspiring first-person account of eighty years in the life of a man who moved from humble beginnings to the bright lights of Hollywood, following his passion and creating long-lasting relationships as he climbed the ladder of success.


Praise For Federico: One Man’s Remarkable Journey from Tututepec to L.A.…

“A remarkable narrative telling of Indigenous origins, transformation in the city, and eventual migration to the United States, Federico by Federico Jiménez Caballero brings life to a unique story beginning in rural Oaxaca and ending in Los Angeles.”—Anna M. Nogar, author of Quill and Cross in the Borderlands: Sor María de Ágreda and the Lady in Blue, 1628 to the Present

Federico Jiménez Caballero is of Indigenous Mixtec and mestizo heritage from Tututepec, a small town in coastal Oaxaca, Mexico. He came to the United States as a researcher at the University of California, Los Angeles, in the late 1960s. Over the years he became a well-known and successful jewelry artist and gallery owner in Santa Monica, California. As a philanthropist, he serves on museum and nonprofit boards, and he has opened a museum in Oaxaca.

Shelby Tisdale is the director of the Center of Southwest Studies at Fort Lewis College and an award-winning author. Her book Fine Indian Jewelry of the Southwest: The Millicent Rogers Museum Collection received two awards. Her latest book, Pablita Valarde: In Her Own Words, is a full-length biography of a famous American Indian painter.