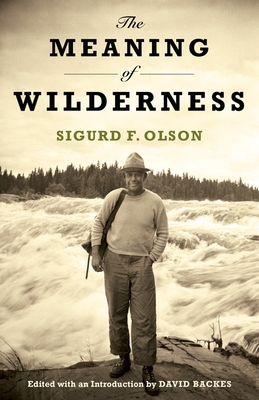 Sigurd F. Olson (1899-1982) was one of the greatest environmentalists of the twentieth century. A conservation activist and popular writer, Olson introduced a generation of readers to the importance of wilderness. He served as president of the Wilderness Society and the National Parks Association and as a consultant to the federal government on wilderness preservation and ecological problems. He earned many honors, including the highest possible from the Sierra Club, National Wildlife Federation, and Izaak Walton League.

Olson is perhaps best known, though, for his many books that express the wonder, awe, and peace he found in the wilderness, including the nature classics The Singing Wilderness, Listening Point, and Reflections from the North Country. While these books have greatly influenced subsequent environmentalist movements and writers such as Annie Dillard and Barry Lopez, a major portion of Olson’s wilderness writing-much of it originating as speeches-has been relatively inaccessible, scattered in a number of magazines and obscure books over a period of more than fifty years, or never published at all.

The Meaning of Wilderness gathers together the most important of Sigurd Olson’s articles and speeches, making them available for the first time. The book also contains an introduction and chapter-by-chapter commentary by Olson’s authorized biographer, David Backes, that help the reader discover the various facets of Olson’s wilderness philosophy and their development over time. A lively look at the evolution of one of environmentalism’s greatest figures, The Meaning of Wilderness will be essential reading for Olson fans, historians, and outdoors people around the country.

David Backes is the author of A Wilderness Within: The Life of Sigurd F. Olson (Minnesota, 1997), winner of the 1998 Small Press Book Award for biography. Backes is also the author of Canoe Country: An Embattled Wilderness (1991) and The Wilderness Companion (1992).

(2015)
David Backes is the author of A Wilderness Within: The Life of Sigurd F. Olson (Minnesota, 1997), winner of the 1998 Small Press Book Award for biography.