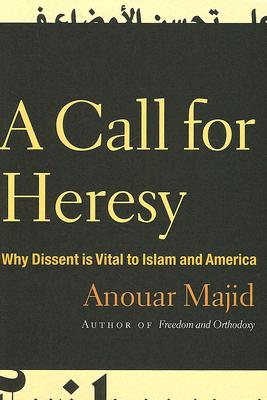 A Call for Heresy

Why Dissent Is Vital to Islam and America

A Call for Heresy discovers unexpected common ground in one of the most inflammatory issues of the twenty-first century: the deepening conflict between the Islamic world and the United States. Moving beyond simplistic answers, Anouar Majid argues that the Islamic world and the United States are both in precipitous states of decline because, in each, religious, political, and economic orthodoxies have silenced the voices of their most creative thinkers—the visionary nonconformists, radicals, and revolutionaries who are often dismissed, or even punished, as heretics.

The United States and contemporary Islam share far more than partisans on either side admit, Majid provocatively argues, and this “clash of civilizations” is in reality a clash of competing fundamentalisms. Illustrating this point, he draws surprising parallels between the histories and cultures of Islam and the United States and their shortsighted suppression of heresy (zandaqa, in Arabic), from Muslim poets and philosophers like Ibn Rushd (known in the West as Averroës) to the freethinker Thomas Paine, and from Abu Bakr Razi and Al-Farabi to Thomas Jefferson and Abraham Lincoln. He finds bitter irony in the fact that Islamic culture is now at war with a nation whose ideals are losing ground to the reactionary forces that have long condemned Islam to stagnation.

The solution, Majid concludes, is a long-overdue revival of dissent. Heresy is no longer a contrarian’s luxury, for only through encouraging an engaged and progressive intellectual tradition can the nations reverse their decline and finally work together for global justice and the common good of humanity.

Anouar Majid is professor and founding chair of the Department of English at the University of New England in Biddeford, Maine. He is the author of Freedom and Orthodoxy: Islam and Difference in the Post-Andalusian Age and Unveiling Traditions: Postcolonial Islam in a Polycentric World, which was recommended by the American Association of University Professors as a book for understanding the context of 9/11. He is also the cofounder and editor of Tingis, a Moroccan American magazine of ideas and culture.
or
Not Currently Available for Direct Purchase