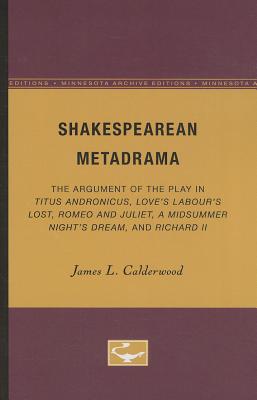 The Argument of the Play in Titus Andronicus, Love’s Labour’s Lost, Romeo and Juliet, A Midsummer Night’s Dream, and Richard II

In a new approach to Shakespeare criticism, the author interprets five of Shakespeare's early plays as metadramas, dramas that are not only about the various moral, social, political, and other thematic issues with which critics have so long been concerned but also about the plays themselves. Professor Calderwood demonstrates that in these five plays Shakespeare writes about his dramatic art -- its nature, its media of language and theater, its generic forms and conventions, its relationship to truth and the social order.

In an introductory chapter the author explains his theory of metadrama, placing it in a general critical context as well as in the specific framework of Shakespeare's plays. He distinguishes between the meaning of metadrama and the similar terms "metaplay" and "metatheare." He points out that the dominant metadramatic aspect of the five plays under study is the interplay of language and action in drama. A separate chapter is devoted to the interpretation of each of the plays.

Professor Calderwood is aware that in presenting his critical theory and interpretations he may be met with skepticism by other scholars and critics. He anticipates such a situation in the introduction: "To the critic trying on introductory styles for a book on Shakespearean metadrama," he writes, "the plight of Falstaff at the Boar's Head Tavern comes all to readily to mind. 'What trick," he must ask himself, 'what device, what starting-hole, canst thou now find out to hide thee from this open and apparent shame?'"

James L. Calderwood is Professor Emeritus of English and Comparative Literature at the University of California, Irvine. He is co-editor of a number of other books on poetry, drama, and criticism.
Loading...
or support indie stores by buying on