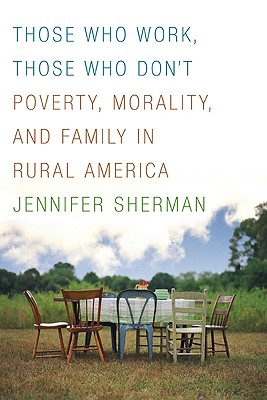 Those Who Work, Those Who Don't

When the rural poor prioritize issues such as the right to bear arms, and disapprove of welfare despite their economic concerns, they are often dismissed as uneducated and backward by academics and political analysts. In Those Who Work, Those Who Don't, Jennifer Sherman offers a much-needed sympathetic understanding of poor rural Americans, persuasively arguing that the growing cultural significance of moral values is a reasonable and inevitable response to economic collapse and political powerlessness.

Those Who Work, Those Who Don't is based on the intimate interviews and in-depth research Sherman conducted while spending a year living in "Golden Valley," a remote logging town in Northern California. Economically devastated by the 1990 ruling that listed the northern spotted owl as a threatened species, Golden Valley proved to be a rich case study for Sherman. She looks at how the members of the community coped with downward mobility caused by the loss of timber industry jobs and examines a wide range of reactions. She shows how substance abuse, domestic violence, and gender roles fluctuated under the town's economic strain.

Compellingly written, shot through with honesty and empathy, Those Who Work, Those Who Don't is a rare firsthand account that studies the rural poor. As incomes erode and the American dream becomes more and more inaccessible, Sherman reveals that moral values and practices become a way for the poor to gain status and maintain a sense of dignity in the face of economic ruin.

Jennifer Sherman is assistant professor of sociology at Washington State University.
Loading...
or
Not Currently Available for Direct Purchase