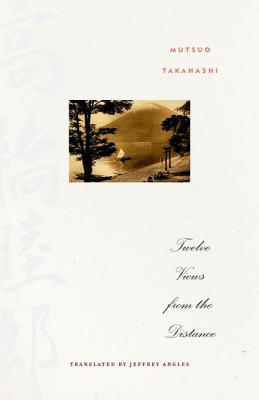 Twelve Views from the Distance

From one of the foremost poets in contemporary Japan comes this entrancing memoir that traces a boy’s childhood and its intersection with the rise of the Japanese empire and World War II. Originally published in 1970, this translation is the first available in English.

In twelve chapters that visit and revisit critical points in his boyhood, Twelve Views from the Distance presents a vanished time and place through the eyes of an accomplished poet. Recounting memories from his youth, Mutsuo Takahashi captures the full range of his internal life as a boy, shifting between his experiences and descriptions of childhood friendships, games, songs, and school. With great candor, he also discusses the budding awareness of his sexual preference for men, providing a rich exploration of one man’s early queer life in a place where modern, Western-influenced models of gay identity were still unknown.

Growing up poor in rural southwestern Japan, far from the urban life that many of his contemporaries have written about, Takahashi experienced a reality rarely portrayed in literature. In addition to his personal remembrances, the book paints a vivid portrait of rural Japan, full of oral tradition, superstition, and remnants of customs that have quickly disappeared in postwar Japan. With profuse local color and detail, he re-creates the lost world that was the setting for his beginnings as a gay man and poet.


Praise For Twelve Views from the Distance…

Mutsuo Takahashi is one of Japan’s leading living poets. He has published more than three dozen anthologies of poetry and is a prolific essayist, literary historian, and critic.

Jeffrey Angles is associate professor of modern Japanese literature and translation studies at Western Michigan University. He is the author of Writing the Love of Boys: Origins of Bishonen Culture in Modernist Japanese Literature (Minnesota, 2011).