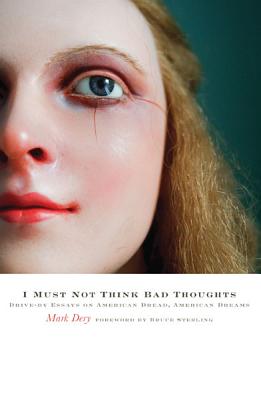 I Must Not Think Bad Thoughts

Mark Dery’s cultural criticism is the stuff that nightmares are made of. He’s a witty and brilliant tour guide on an intellectual journey through our darkest desires and strangest inclinations. You can’t look away even if you want to.
—Mark Frauenfelder and David Pescovitz, Boing Boing

Mark Dery is gifted with sanity, humor, learning, and a prose style as keen as a barber’s razor. He applies those qualities to a trustworthy and entertaining analysis of the lunatic fringe, which constitutes an ever-larger portion of the discourse in America today.
—Luc Sante

Do not turn squeamish from the many considerations of death that lurk within—vampires, tombs, disease, corruption of many varieties. Mark Dery’s restless and stylish essay is concerned with one thing only—what it means to be alive in America.
—Richard Rodriguez, author of Brown: The Last Discovery of America

The bebop rhythms of Mark Dery’s prose reflect an intellectual excitement that is rare among contemporary cultural essayists. Reading him is like ingesting a powerful jolt of espresso.
—Ron Rosenbaum, author of Explaining Hitler and The Shakespeare Wars

Mark Dery is a cultural critic. He is best known for his writings on the politics of popular culture in books such as The Pyrotechnic Insanitarium: American Culture on the Brink,Escape Velocity: Cyberculture at the End of the Century,Flame Wars, and Culture Jamming. He has been a professor of journalism at New York University, a Chancellor’s Distinguished Fellow at the University of California, Irvine, and a visiting scholar at the American Academy in Rome. www.markdery.com.

Bruce Sterling is a science fiction author whose novels include Distraction, Zeitgeist, Holy Fire, and The Caryatids.
Loading...
or
Not Currently Available for Direct Purchase