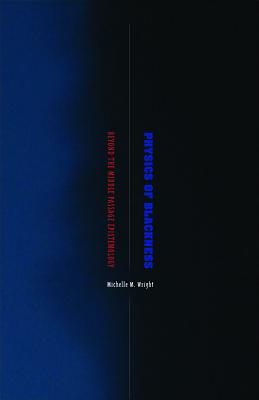 Beyond the Middle Passage Epistemology

What does it mean to be Black? If Blackness is not biological in origin but socially and discursively constructed, does the meaning of Blackness change over time and space? In Physics of Blackness: Beyond the Middle Passage Epistemology, Michelle M. Wright argues that although we often explicitly define Blackness as a “what,” it in fact always operates as a “when” and a “where.”

By putting lay discourses on spacetime from physics into conversation with works on identity from the African Diaspora, Physics of Blackness explores how Middle Passage epistemology subverts racist assumptions about Blackness, yet its linear structure inhibits the kind of inclusive epistemology of Blackness needed in the twenty-first century. Wright then engages with bodies frequently excluded from contemporary mainstream consideration: Black feminists, Black queers, recent Black African immigrants to the West, and Blacks whose histories may weave in and out of the Middle Passage epistemology but do not cohere to it.

Physics of Blackness takes the reader on a journey both known and unfamiliar—from Isaac Newton’s laws of motion and gravity to the contemporary politics of diasporic Blackness in the academy, from James Baldwin’s postwar trope of the Eiffel Tower as the site for diasporic encounters to theoretical particle physics’ theory of multiverses and superpositioning, to the almost erased lives of Black African women during World War II. Accessible in its style, global in its perspective, and rigorous in its logic, Physics of Blackness will change the way you look at Blackness.


Praise For Physics of Blackness: Beyond the Middle Passage Epistemology…

"Opening up the middle passage, and working with and across narratives by thinkers such as Paul Gilroy, Ama Ata Aidoo, and James Baldwin, Physics of Blackness asks that we think through the time and space of the diaspora in order to notice that blackness is continually updating itself."—Katherine McKittrick, author of Demonic Grounds

"An unorthodox and highly engaging study by a scholar unrestrained by the conventions of the field. Michelle M. Wright advances a penetrating, stimulating, and immensely rewarding contribution for those that rise to the challenge."—Stephen Small, UC Berkeley

"By defining blackness against the limitations of [linear progress narratives], Wright expands our senses of temporality and even of physics."—KronoScope

"Its appeal to philosophical, literary, cultural and diasporic studies is apparent; but while contributing significantly to, and grounded in, the humanities, Physics of Blackness is not restricted to it. Its redeployment of analytical categories informs an innovative, interdisciplinary approach that necessarily reinvigorates and enhances generally academic and societally transformative pursuits for future oriented, inclusive and nonhierarchical understandings of not just black, but all,racial(ised) ontologies."—Transnational Literature

Michelle M. Wright is associate professor of Black European and African Diaspora studies at Northwestern University. She is the author of Becoming Black: Creating Identity in the African Diaspora.