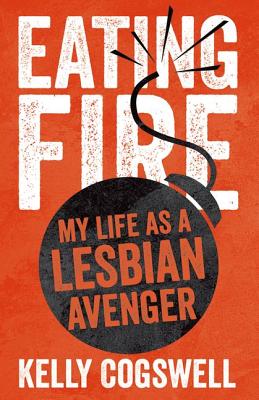 My Life as a Lesbian Avenger

When Kelly Cogswell plunged into New York’s East Village in 1992, she had just come out. An ex–Southern Baptist born in Kentucky, she was camping in an Avenue B loft, scribbling poems, and playing in an underground band, trying to figure out her next move. A couple of months later she was consumed by the Lesbian Avengers, instigating direct action campaigns, battling cops on Fifth Avenue, mobilizing 20,000 dykes for a march on Washington, D.C., and eating fire—literally—in front of the White House.

At once streetwise and wistful, Eating Fire is a witty and urgent coming-of-age memoir spanning two decades, from the Culture War of the early 1990s to the War on Terror. Cogswell’s story is an engaging blend of picaresque adventure, how-to activist handbook, and rigorous inquiry into questions of identity, resistance, and citizenship. It is also a compelling, personal recollection of friendships and fallings-out and of finding true love—several times over. After the Lesbian Avengers imploded, Cogswell describes how she became a pioneering citizen journalist, cofounding the Gully online magazine with the groundbreaking goal of offering “queer views on everything.”

The first in-depth account of the influential Lesbian Avengers, Eating Fire reveals the group’s relationship to the queer art and activist scene in early ’90s New York and establishes the media-savvy Avengers as an important precursor to groups such as Occupy Wall Street and La Barbe, in France. A rare insider’s look at the process and perils of street activism, Kelly Cogswell’s memoir is an uncompromising and ultimately empowering story of creative resistance against hatred and injustice.


Praise For Eating Fire: My Life as a Lesbian Avenger…

"To have a volume about lesbian activism that focuses on the most effective, most publicized and controversial group, the Lesbian Avengers, is almost too good to be true. Eating Fire is an intimate activist handbook that offers a generous ‘us’ and we can happily enter the space of it from so many angles." —Eileen Myles, author of Inferno (A Poet's Novel)

Kelly Cogswell is an independent journalist and blogger. She has been recognized by the New York Press Association for her regular column in New York’s Gay City News and is a recipient of a Joan Heller–Diane Bernard Fellowship for her project documenting the Lesbian Avengers.