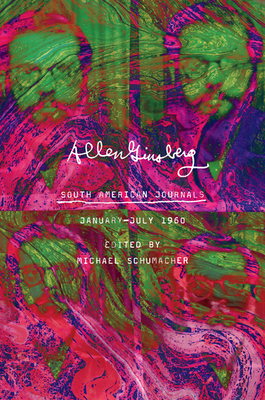 When Allen Ginsberg went to South America in 1960, ostensibly to attend a literary conference, he had a different kind of trip in mind. This would be another experience in the Beat poet’s journey deep into the realm of consciousness, the inward travel explored to exhilarating effect in his writing—whether in the poetry that had already earned him international acclaim or in the idiosyncratic journals that raised self-documentation to a new form of art. In his South American Journals, covering a tumultuous six months, Ginsberg describes his travels through Chile and Peru, his visit to Machu Picchu, and his search for a source for ayahuasca, or yagé, a mind-expanding drug recommended by his friend William S. Burroughs, another writer well traveled in altered states of consciousness.

Far from quotidian diary entries, Ginsberg’s observations in these pages, interspersed with poetry, dream notations, and musings about spirituality, amount to a critical chapter in the poet’s informal autobiography. Writing more during these six months than in any of his other journals, Ginsberg summons great ferment. In his distinctive accounts of all that he encounters, elevating travel writing to lyrical expression; in an abundance of poems published here for the first time, in both first drafts and polished forms; in his reports of fascinating conversations; and, in particular, in detailed passages that delve into inner recesses of his consciousness, Ginsberg recreates a journey like no other, one that reflects the workings of one of the best minds of his generation in the world of his own making and in its mysterious, immutable counterpart in the South American landscape.

Allen Ginsberg (1926–1997) was born in Newark, New Jersey. As a student at Columbia College in the 1940s, he began a close friendship with William Burroughs, Neal Cassady, and Jack Kerouac, and he became associated with the Beat movement and the San Francisco Renaissance in the 1950s. After jobs as a laborer, sailor, and market researcher, he published his first volume of poetry, Howl and Other Poems, in 1956. “Howl” defeated censorship trials to become one of the most widely read poems of the twentieth century.

Michael Schumacher is author of Dharma Lion, the acclaimed biography of Allen Ginsberg, and editor of First Thought: Conversations with Allen Ginsberg and Iron Curtain Journals: January–May 1965 (all from Minnesota). He is also editor of The Essential Ginsberg.