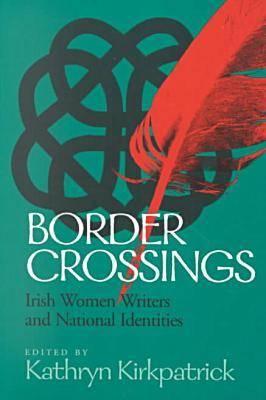 Exploring two centuries of Irish women's writing, contributors from Ireland and the United States show how these women have struggled against both colonialism and their own patriarchal nation.

Writing in the shadows of Joyce and Yeats, Irish women have long contributed to the ongoing formation of Irish identities. Border Crossings secures for a largely overlooked body of writing its place in the Irish literary canon.

Ranging from consideration of early writers such as Maria Edgeworth and Sydney Owenson to recent feminist pamphlet wars. Border Crossings explores the connections between personal and national identities, politics and literary style, and gender and artistic vocation. Some essays focus on prominent writers such as Augusta Gregory and Eavan Boland, and others introduce readers to lesser-known voices such as Emily Lawless and Mary Beckett. Some also show how groups of women, such as upper-middle-class Catholics and lesbians, have used their writing to construct social goals. All help to revise the perception of historical and contemporary roles Irish women writers have played in shaping--and being shaped by--Irish history.

By surveying writers of poetry, fiction, drama, and even pamphlets, Border Crossings demonstrates the breadth and vitality of Irish women's writing. It shows that today's Irish women writers have significant foremothers, and more of them than we usually think.

"Border Crossings contributes to revising the perception of historical and contemporary roles Irish women writers have played in shaping, as well as being shaped by, Irish history. The essays themselves shape new ways of understanding their accomplishment as well as highlight writers whose works have been ignored, slighted, or too little noticed. "—Susan Shaw Sailer, West Virginia University

"This impressive collection, covering a wide range of literature from the 18th century to the present, is an exciting and valuable contribution to Irish studies in general and to the study of Irish women writers in particular. These essays bring new approaches to bear on the ways Irish women writers negotiate the borders between nation and nationalism and are a welcome addition to the growing body of work on Irish women's writing."—John Rickard, Bucknell University

Kathryn Kirkpatrick is Associate Professor of English at Appalachian State University. She has edited editions of Maria Edgeworth's Belinda and Sydney Owenson's The Wild Irish Girl.