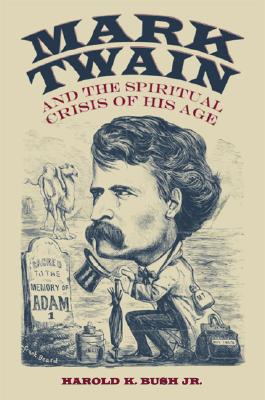 The writer’s fascination with America’s spiritual and religious evolution in the 19th century.

Mark Twain is often pictured as a severe critic of religious piety, shaking his fist at God and mocking the devout. Such a view, however, is only partly correct. It ignores the social realities of Twain’s major period as a writer and his own spiritual interests: his participation in church activities, his socially progressive agenda, his reliance on religious themes in his major works, and his friendships with clergymen, especially his pastor and best friend, Joe Twichell. It also betrays a conception of religion that is more contemporary than that of the period in which he lived.

Harold K. Bush Jr. highlights Twain’s attractions to and engagements with the wide variety of religious phenomena of America in his lifetime, and how these matters affected his writings. Though Twain lived in an era of tremendous religious vigor, it was also a time of spiritual upheaval and crisis. The rise of biological and psychological sciences, the criticism of biblical texts as literary documents, the influx of world religions and immigrant communities, and the trauma of the Civil War all had dramatic effects on America’s religious life. At the same time mass urban revivalism, the ecumenical movement, Social Christianity, and occultic phenomena, like spiritualism and mind sciences, all rushed in to fill the voids. The rapid growth of agnosticism in the 1870s and 1880s is also clearly reflected in Twain’s life and writings. Thus Twain’s career reflects in an unusually resonant way the vast changes in American belief during his lifetime.

Bush’s study offers both a new and more complicated understanding of Twain and his literary output and serves as the cultural biography of an era.

"Bush attempts 'to consider how Twain's social and cultural environments were deeply indebted to Christianity of a special time and place in American history.' This is a cultural biography of Mark Twain's religious ethos "that focuses on the positive contribution of American religion" in his life and work. Early chapters center on the author's roots, his wife, and the 'moral ethics of the Victorian home,' exploring the ways his wife and religious friends, including Pastor Joe Twichell, affected his ideas and writing. Bush succeeds in recovering 'the moral language and cultural traditions that Mark Twain drew upon in creating his literary legacy.' Bush asserts that many readers think Mark Twain criticized those who worshipped and are unaware of the fact that his views on religion changed in later life. Additional chapters discuss Mark Twain's faith and his view on life and the future, and the book culminates with a discussion on the grief Twain faced in his final years. A section of detailed notes provides additional references and information. Summing Up: Recommended. Upper-division undergraduates through faculty."
—CHOICE

"This is an original and significant contribution to Twain studies. . . . Material on the Chinese mission, the reinterpretation of his early soul-searching, and the deeper look at Twichell are valuable to understanding Twain."--David Sloane, author of Mark Twain as a Literary Comedian

Harold K. Bush Jr. is Associate Professor of English at Saint Louis University and the author of American Declarations: Rebellion and Repentance in American Cultural History.
Loading...
or
Not Currently Available for Direct Purchase