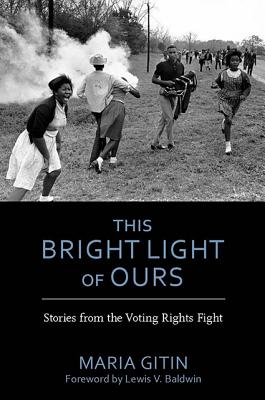 This Bright Light of Ours

Stories from the Voting Rights Fight (The Modern South)

This Bright Light of Ours offers a tightly focused insider’s view of the community-based activism that was the heart of the civil rights movement. A celebration of grassroots heroes, this book details through first-person accounts the contributions of ordinary people who formed  the nonviolent army that won the fight for voting rights.

Combining memoir and oral history, Maria Gitin fills a vital gap in civil rights history by focusing on the neglected Freedom Summer of 1965 when hundreds of college students joined forces with local black leaders to register thousands of new black voters in the rural South. Gitin was an idealistic nineteen-year-old college freshman from a small farming community north of San Francisco who felt called to action when she saw televised images of brutal attacks on peaceful demonstrators during Bloody Sunday, in Selma, Alabama.

Atypical among white civil rights volunteers, Gitin came from a rural low-income family. She raised funds to attend an intensive orientation in Atlanta featuring now-legendary civil rights leaders. Her detailed letters include the first narrative account of this orientation and the only in-depth field report from a teenage Summer Community Organization and Political Education (SCOPE) project participant.

Gitin details the dangerous life of civil rights activists in Wilcox County, Alabama, where she was assigned. She tells of threats and arrests, but also of forming deep friendships and of falling in love. More than four decades later, Gitin returned to Wilcox County to revisit the people and places that she could never forget and to discover their views of the “outside agitators” who had come to their community. Through conversational interviews with more than fifty Wilcox County residents and former civil rights workers, she has created a channel for the voices of these unheralded heroes who formed the backbone of the civil rights movement.

Praise For This Bright Light of Ours: Stories from the Voting Rights Fight (The Modern South)…

“I love when my book research introduces me to amazing people. I just got off the phone with @Maria Gitin, one of the student civil rights workers in the 1960s who joined the battle to register African American voters in the American South. She wrote a book that has been my bible as I write, This Bright Light of Ours. What a brave young woman she was!”
—Diane Chamberlain, author of The Dream Daughters and Big Lies in a Small Town

"This book offers an honest expression of the ongoing cost paid by black and white civil rights volunteers alike. Gitin’s description of the depression, rejection, medical issues, and PTSD suffered by her and other SCOPE volunteers (many of whom were white) is only matched by the economic intimidation, loss of jobs, loss of liberty, and death suffered by the black residents of Wilcox County who stayed to continue the fight. This is an important piece of the civil rights story that has not been told." —Southern Register

"Though her book demonstrates a wandering void of hope at times, in the end, Gitin, through numerous interviews and ruminations, rewrites an important moment of history for people often not remembered, providing the city and the county with a lasting vision of optimism."
—Studies in American Culture

“In addition to its important historiographical interventions, this book has many strengths. It provides a day-to-day look at a grassroots, local movement, an extremely rare perspective that is nearly impossible to accomplish without the kind of personal sources (letters home) and recollections that Gitin is able to draw on. It reveals SCLC’s operational culture. It explicates the role of outside organizers and the symbiotic relationship they had with local activists and movement supporters. This Bright Light of Ours shows how gender, race, class, and birthplace shaped people’s actions and activism. It makes painfully clear the daunting task that organizers faced because of racial terror and the paralyzing fear that it created. Gitin demonstrates the depth and breadth of white supremacy, which informed white opposition to the movement. And she shows how transformative movement participation was, and how difficult ‘reentering’ society was for activists after they left the southern struggle.”—Hasan Kwame Jeffries, author ofBloody Lowndes:Civil Rights and Black Power in Alabama’s Black Belt

"The wide and diverse array of voices leaps from the pages [of This Bright Light of Ours] with stunning force. They are authentic voices, and the stories they share are dramatic, gripping, poignant, uplifting and empowering. "—Lewis V Baldwin, King Scholar and author In a Single Garment of Destiny, professor Vanderbilt University

"Maria Gitin's book is a unique blend of her own story and those of the local community with whom she worked in Wilcox County in the exceptionally challenging struggle of the 1960s civil rights movement. Very, very few books offer this kind of retrospective and prospective. Gitin's love for the people of Wilcox County shines through. The work reinforces an understanding of the courage of those times, the penalties exacted in real human lives and ways, the strength of the Black community, their openness and caring, and a brilliant documentation of how completely segregated the South - at least this corner of the South - remains. These are powerful stories profoundly relevant for our own times." —Bettina Aptheker, Professor, Feminist Studies, University of California, Santa Cruz

"This Bright Light of Ours: Stories from the Voting Rights Fight is a first-hand, from-the-front-lines report of the '60s Southern voting rights movement in one of the most resistant counties in one of the most resistant states. This is a must-read account of a less publicized aspect of the Southern civil rights movement -- white volunteers risking life and limb to challenge white supremacy at its most brutal." —Julian Bond, Chairman Emeritus, NAACP

“Maria Gitin tells her own story on her own terms, giving readers an honest rendering of one woman’s experience on the front lines of struggle against a deeply entrenched system of racial oppression.  Her book is a worthy companion piece to Anne Moody’s Coming of Age in Mississippi and Ned Cobb’s superb Alabama narrative All God’s Dangers.”
—Clarence Mohr, author of On the Threshold of Freedom: Masters and Slaves in Civil War Georgia

“This Bright Light of Ours is everything a book about civil rights should be. Gitin’s memoir is more honest than most, as she details the many sacrifices that had to be made to navigate hostile family issues. In having read a number of books about the civil rights movement, Gitin is the first to addresses and detail SCOPE—and for that she has made an important contribution to the field.”
—John A. Obee, civil rights veteran, Simpson County Civic League, Mississippi, 1967

Maria Gitin was a national fundraising and diversity trainer for twenty-eight years. She has served as Executive Director of a YWCA, founded a shelter for survivors of domestic violence, and continues to register voters in communities of color. Currently, Gitin is a frequent presenter on cultural competency and voting rights. She lives in Northern California with her photographer husband, Samuel Torres Jr.
Loading...
or
Not Currently Available for Direct Purchase